If you hear noise and clatter this Christmas Eve, it may not be Santa's reindeer, but a band of witches and trolls coming to party: "One Christmas eve...there arose a frightful noise and clatter in the hallway outside the queen's apartment. Tatterhood asked what it was that was making such a noise outside.

But Tatterhood wouldn't give in until she found out all about it; and so the queen told her it was a pack of trolls and witches who had come there to celebrate Christmas. So Tatterhood said that she would just go out and drive them away. In spite of all they could say, and however much they begged and asked her to leave the trolls alone, she just had to go out and drive the witches off. She begged the queen to be careful and keep all the doors shut tight, so that not one of them would open the least bit." 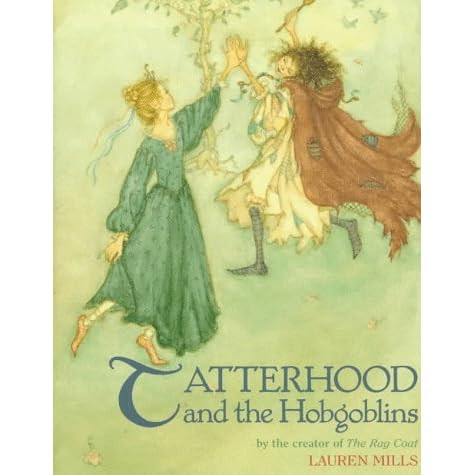 -Excerpt from Tatterhood, a Norwegian fairy tale collected by Asbjornsen and Moe. You can read the full text here, which I would highly recommend: it's a tale that features an strong, active heroine who not only saved the castle from the trolls and witches, but then saved her sister who had been turned into a calf, and engineered marriages for both of them. The heroine is also very ugly, but as often happens in the world of fairy tales, transforms at the end into a beautiful bride. It's similar to Cinderella, where objects are one by one turned into gorgeous finery, but in this tale she is the one who transforms herself. Which makes it seem as though she had the power to transform all along, but chose to stay in her ugly state. It's a very empowering tale for girls and women everywhere, especially those who may not conform to society's expectations for desirability, and one that I would love to see become more well known.

Images- John Bauer, Lauren A. Mills
Kristin at 9:33 AM