He Sees You When He's Creepin': Tales of Krampus

Kate Wolford and the lovely folk at World Weaver Press were kind enough to send me a copy of He Sees You When He's Creepin': Tales of Krampus. While I haven't had as much time as I would like to curl up by the tree and read, I've been able to read a few of the stories here and there! 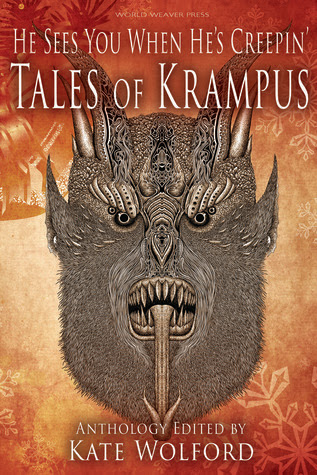 Krampus is the cloven-hoofed, curly-horned, and long-tongued dark companion of St. Nick. Sometimes a hero, sometimes a villain, in this anthology, he’s always more than just a sidekick. You’ll meet manifestations of Santa’s dark servant as he goes toe-to-toe with a bratty Cinderella, a guitar-slinging girl hero, a coffee shop-owning hipster, and sometimes even St. Nick himself. Whether you want a dash of horror or a hint of joy and redemption, these 12 new tales of Krampus will help you gear up for the most “wonderful” time of the year.

The character Krampus is a fascinating one, so I was eager to learn more about him. I was excited to see the first two stories in the book were by authors whose stories I had particularly enjoyed from Frozen Fairy Tales. Steven Grimms' "Villainess Ascending" is the first-his twisted reworkings of fairy tales are well written and I enjoyed his imagining of Krampus interacting with a Cinderella in Vienna around 1800 (and another fairy tale character makes an appearance too!). I also enjoyed the historical details, such as using Schonbrunn Palace as the setting:

In the next story, Lissa Marie Redmond's character James made his second appearance since Frozen Fairy Tales. This modern story is much more lighthearted in tone. For example, I laughed at the line "So I did what any millenial with a problem would do, I went upstairs and googled it." (So true!)


One of the interesting things about reading a collection of Krampus stories is seeing the various ways he is portrayed-sometimes he's a clear villain, others he's really the victim or the hero. It's an interesting concept to explore what would go on in the mind of the monster who is sent each year to violently harm naughty children...does he relish his work? Is it just a job to him? Is he trapped in that role? Along with that, there are some interesting looks into what might motivate Santa/St. Nicholas (and warning-he is not always the classic jolly old soul!). As Wolford points out in the introduction, Krampus in folklore isn't viewed as the anti-Santa, a demon to be destroyed, but his partner. Although his methods might be extreme, his role provides a balance to the gift-giving St. Nicholas. In fact, it's interesting that many authors (of the stories I've read so far) are more sympathetic to Krampus than capitalized on the opportunity to make him into a Christmas horror story.

I've been pondering our own, modern cultural Santa/behavior myths as well. I wouldn't advocate giving children no presents, or coal, on Christmas if they've been especially "naughty" that year, but the threats we tend to give (Elf on the Shelf reporting on your behavior to Santa, for example) are so empty, it seems like a cheap way to influence behavior if there will be no follow through (I'm a teacher, and threats without consequences are a recipe for chaos, not better behavior!).

So far another standout story I've also really enjoyed Anya J. Davis' "The Business of Christmas." It's a clever look into how Santa and Krampus might have developed their operations over time to fit in with our modern culture and technology.

While some of these stories might be a little more dark or cynical than typical holiday fare (which might be a perk for some people tired of extra cheesy Christmas entertainment), not only are they thought provoking, but they retain a sense of the wonder and magic of Christmas. I look forward to reading more!