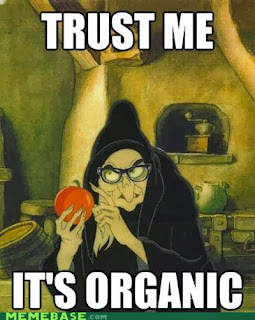 "The current Hollywood vogue for fairytales has been partly inspired by the bicentenary of Grimms Fairy Tales...but Bill [Gray, University of Chichester] suggests the economic downturn may be a factor too. He says, 'These so-called fairy tales are often about surviving a (murderously) dysfunctional family in a harsh situation. Don't forget the Grimms created their book while Germany was an occupied country under French rule. Life was harsh; people did starve to death. The sort of scenario we see in Hansel and Gretel is not too far-fetched. 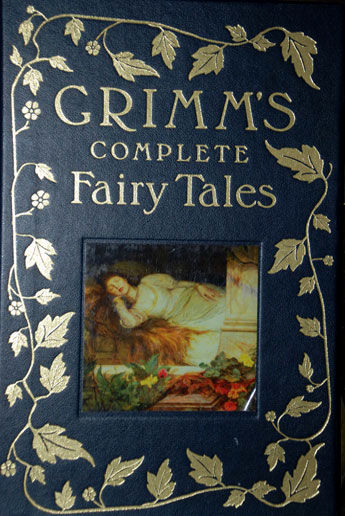 "'So-called fairy tales both take you out of the harsh demands of real life, but are also about finding solutions, finding hope, in hard times. And the cinema is itself a magical shelter from a bleak world-and yet can also be more than just escapism.'"

-from Faerie Magazine, Issue 24 (Either I'm blind or they didn't cite an author for that article) (Be sure to check out Heidi Anne Heiner's, AKA Surlalune's, piece on "Cinderella Through the Years")

I caught bits and pieces of the new Hansel and Gretel movie while my in-laws were watching it a few weeks ago. I agree with Christie of Spinning Straw into Gold that, while it's not one of the most significant versions of a fairy tale, it's a fun movie to watch (but definitely rated R for a reason-I would NOT recommend for younger audiences). But I was surprised that afterwards my future mother-in-law said, "That was cool! I wonder how many other fairy tales they're going to turn on their heads like that?"

We who follow the world of fairy tales know that they're EVERYwhere in media, just check out Once Upon a Blog and see how many fairy tale movies are currently in the works, but those who don't pay attention may be just picking up on the trend. Her comment reminded me that what is cliche to some of us (such as the idea of creating a "twisted" fairy tale, where some traditional plot point or character's status as good or evil is challenged) is dependent on the type of entertainment we consume. Those who don't typically seek out modern versions of fairy tales are being exposed to them, and wanting more!
Posted by Kristin at 12:16 PM 1 comment:

Cocteau and Disney's Beauty and the Beast as Gay Advocates Jerry Griswold claims in his The Meanings of Beauty and the Beast: A Handbook that the two major film versions of "Beauty and the Beast", by Jean Cocteau (1946) and Disney (1991), "essentially present it as a gay version." When I read that I wondered how in the world you could conclude that from seeing the movies. With all the modern versions challenging society's views of gender roles and sexuality, these movies seem to be some of the more traditional ways of telling the story.

While I don't think a gay advocacy is obvious from plot points themselves, there is some very telling information about the creators of the films I had never heard before.

Griswold provides movie summaries; for the purpose of this post I'll just assume you're familiar with the movies' basic plots. Cocteau: Griswold claims that Cocteau makes an effort to show a negative correlation with male heterosexuality. For example, he amplifies the horrific/creepy elements of the story. The tale is often thought to portray the anxieties a woman faces before intimacy with a man, so therefore to increase the horror is to indicate that the horror of heterosexual intimacy never really goes away. Also, when Belle sees the Beast outside her bedroom just after a hunt, paws smoking, and he is ashamed, that supposedly means that "what is ugly and repulsive...are male sexual desires and giving into them." 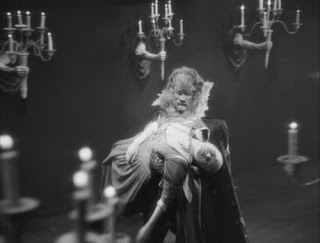 I think the logic there is pretty weak. But what I do find interesting is the ending. I was always bothered by the fact that the Beast turns into the Avenant character, who is clearly a villain. Griswold seems the whole ending scene as intentionally ridiculous-from the cheesy lines to the costumes. Audiences tend to be disappointed at the ending, and Griswold thinks this intentional, which I think makes more sense than taking the ending at face value. Cocteau may have been making light of the traditional storybook ending, man + woman = happily ever after.

Also fascinating-Cocteau was suffering from several "painful and disfiguring skin problems" during the shooting of the film, including boils, carbuncles, eczema, and impetigo, so he may have found himself relating to the Beast physically. Not only was he homosexual, but his lover was Jean Marais, who played Avenant/the Prince. Definitely changes how you view the film to know that. 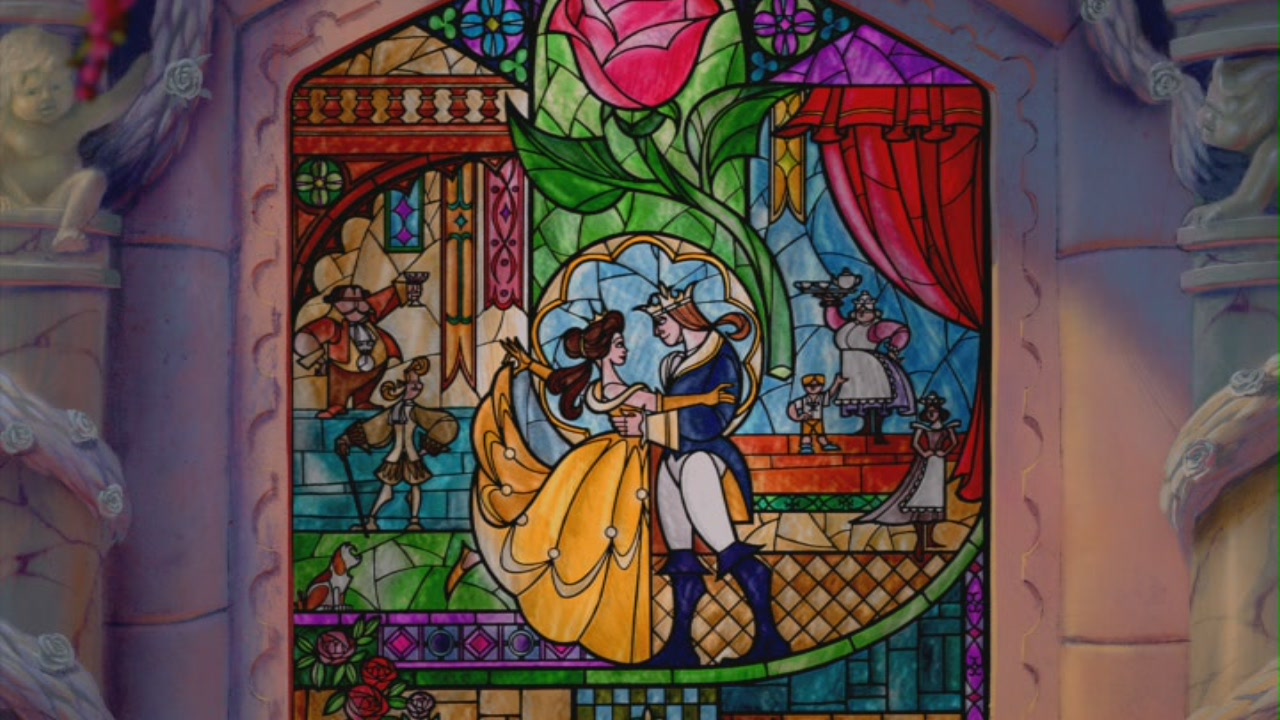 Disney: Throughout the film, Belle's character is looked upon suspiciously by the other townspeople, and their reactions are close to reactions to gay people: "strange," "funny," "peculiar," "odd," "very different from the rest of us." Now on the one hand, I wouldn't connect that to people's reactions to homosexuals specifically because pretty much anyone who's been through puberty can relate to feeling out of place and awkward in some way and the media definitely knows that. So many popular movies/books/tv shows revolve around a main character who is awkward and unpopular, and therefore everyone instantly feels a connection. Of course it's perfectly appropriate to read into the gay experience as one way to relate to Belle, I'm just not sure if I conclude with Griswold that the Disney version is "essentially a gay version." Although the lyricist, Howard Ashman, was gay, so we can assume he had experienced some of the same misunderstandings as Belle.

In his analysis of both films, Griswold sees the chauvinist male characters (Avenant and Gaston) as messages about the dangers of male heterosexuality. Sure there's dangers, but that doesn't mean all male heterosexuals are dangerous.

Griswold sees the Beast and Gaston as inverses of the other. One is essentially good at heart and ugly in appearance, the other handsome in appearance but evil at heart. Echoing the Cocteau film, the Beast can't transform into the Prince until after Gaston dies. Griswold suggests interpreting the title "Beauty and the Beast" to being about Gaston and the Beast, which is a very interesting thought. He even says that the Beast is in danger of becoming Gaston-abusing his power and masculinity, which reminds me of Snow White and how she is in danger of  becoming her stepmother, as many people have recently been interpreting that fairy tale.

So while "Beauty and the Beast" won't pop up in your Netflix cue under the gay and lesbian film sub genre, the Otherness of the Beast can definitely be a way to see the Otherness of the gay community. I have to admit this is not an area I feel qualified to write about-I am very attracted to my fiancé Tony and none of my close friends are gay, but I'd be interested to hear what this fairy tale means to people who are ostracized for being gay, if they feel a special connection to the story.

And as always there's much more in the book, this is just a summary of a few main points, I highly recommend it to any BATB fans.
Posted by Kristin at 3:50 PM 6 comments:

As mentioned earlier, I've been collecting fairy tale-themed wedding ideas from around the interwebs and here are some of my favorites!

First up, from reader Sarah Anne Cox, who made this castle cake for her sister's wedding: 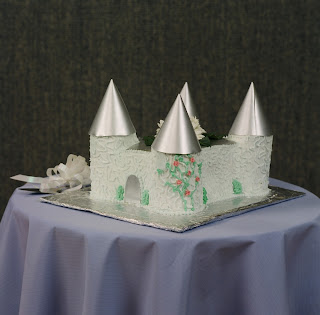 Thanks for sending, Sarah! 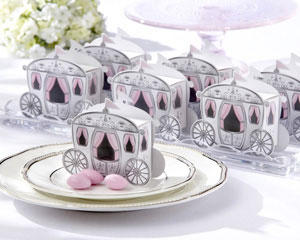 Don't be Late-Save the dates 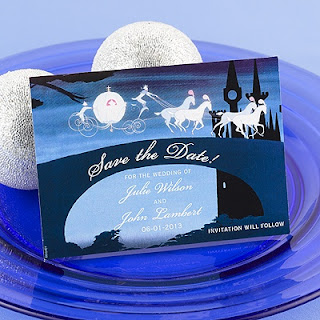 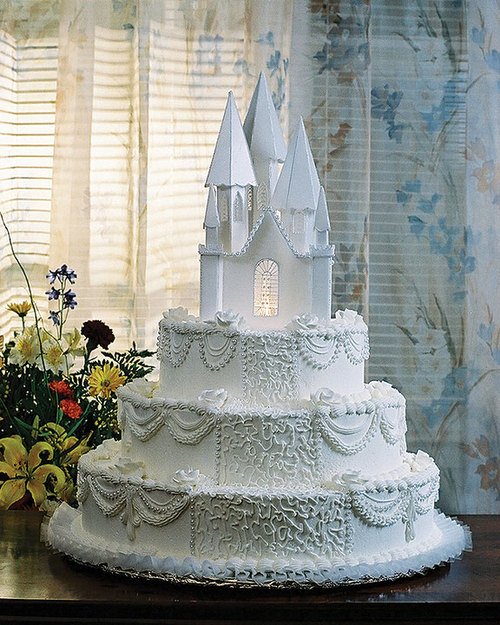 Once Upon a Time Invitations 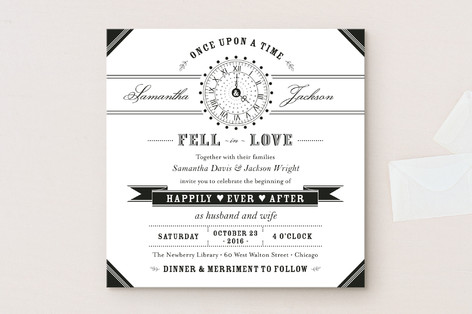 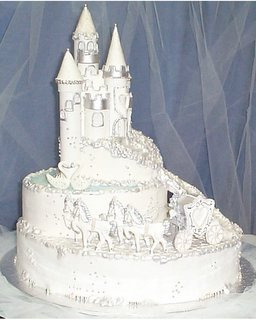 Check out this Snow-White themed wedding! Kind of refreshing to see something other than a Cinderella inspiration 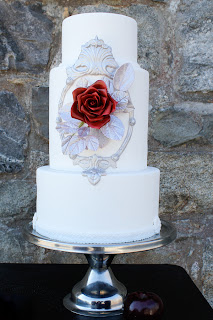 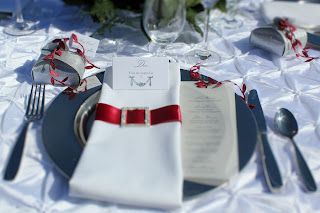 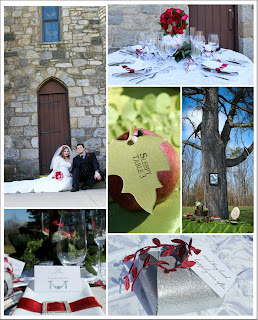 And for the honeymoon...The Castle Garden, a medieval castle-themed room in Big Bear Lake, CA 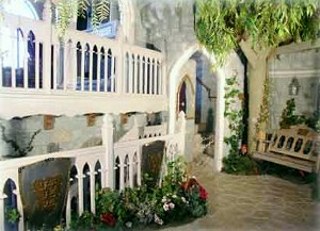 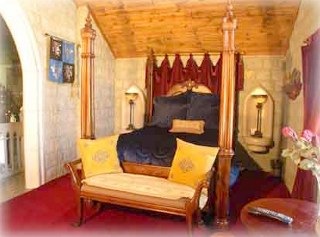 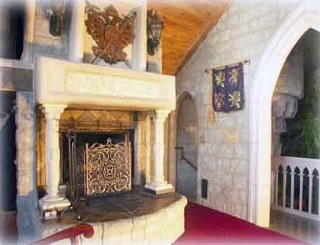 For those of you who might be curious, I won't be using any of the above. But fairy tales are sneaking their way into my wedding plans...
*I will be walking down the aisle to an organ arrangement of the finale from Stravinsky's Firebird (which wasn't intentionally to reference fairy tales, I just think it's one of the most exciting and joyful pieces of music I know)
*My mom is making a slideshow of pictures of us for the reception and the words are framed as a "once upon a time" story
*Also in the above video, one of the songs playing is "I'm a Believer" by the Monkees, which begins with the lyrics: "I thought love was only true in fairy tales/meant for someone else but not for me/Love was out to get me/That's the way it seemed/Disappointment haunted all my dreams". I always thought this song was spot on for me, for all my love of fairy tales I had grown a bit cynical about love and men in general before I met Tony...
*Our reception tables may be named after different Disneyland rides

"A king has two daughters. The elder is wicked and ugly while the younger is beautiful and good. The elder daughter is beloved and lives with the king in the most gorgeous rooms of the palace. The heroine lives with the servants and shares their work.

A neighboring king arranges a festival to last several days. The elder daughter attends it with the father. The heroine is left in the kitchen. She sits crying in the twilight in her small room. Suddenly, a strange little man appears and offers to fulfill a wish for her. The heroine wishes to see the ball where the father and the sister are. She may go, she is told, on the condition that she returns before midnight.

The man vanishes, and the heroine stands in costly dress, wearing heavy gold chains and a crown of diamonds. At her door is a magnificent coach with four snow-white horses whose golden manes reach the ground. The heroine enters the coach and soon finds herself at the palace, admired by all, and unrecognized by her father and sister. As twelve o'clock strikes, she mounts the coach and is soon back in her shabby clothes in her dark room.

The next day the father and sister talk incessantly of the fair, unknown princess. In the evening they go to the festival, leaving the heroine hard at work. Seeing a red glare in the sky from the illuminated palace, the heroine longs to go. Immediately she is beautifully and magnificently dressed. This time her horses are yellow with jet-black plaited manes. At the ball she is admired and courted beyond measure. As the clock strikes midnight, she leaves in the midst of a dance.

On the third evening, a heavy gale blows. She wears a triple crown of sparkling diamonds. Her coach is drawn by eight flame-coloured horses with manes like shining gold. Everyone wants to dance with her. She stays beyond her given time and leaves in her black working dress, only to find outside, instead of a coach, an old wheelbarrow drawn by four small mice. She weeps bitterly over her forgetfulness and in the future passes her days as a common servant in her father's kitchen."