I had never seen some of these Arthur Rackham silhouettes for Cinderella before! Just gorgeous, but also humorous-that poor mouse's expression! Via Pook Press 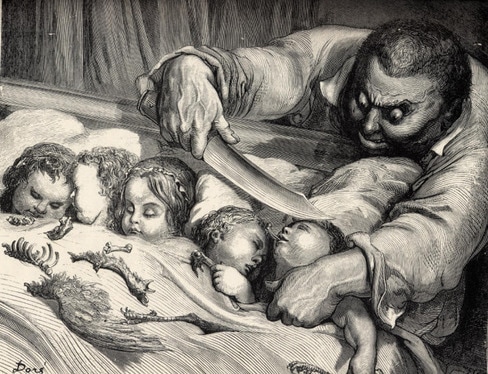 This post by Jeana Jorgensen clarifies the difference between a version and a variant of a folktale (or other form of folklore). I'm sure I've misused those terms before and probably will again in the future but I will try to use them correctly! Jorgensen studied folklore under Alan Dundes (!!). I wasn't familiar with her blog before, but I can't wait to read more of her FolkloreThursday posts. Anybody else getting excited for the solar eclipse coming on August 21? Over at timeanddate.com, they have not only a countdown  but a list of world folklore related to solar eclipses.

The Pomo, an indigenous group of people who live in the northwestern United States, tell a story of a bear who started a fight with the Sun and took a bite out of it. In fact, the Pomo name for a solar eclipse is "Sun got bit by a bear".

After taking a bite of the Sun and resolving their conflict, the bear, as the story goes, went on to meet the Moon and take a bite out of the Moon as well, causing a lunar eclipse. This story may have been their way of explaining why a solar eclipse happens about around 2 weeks before or after a lunar eclipse. 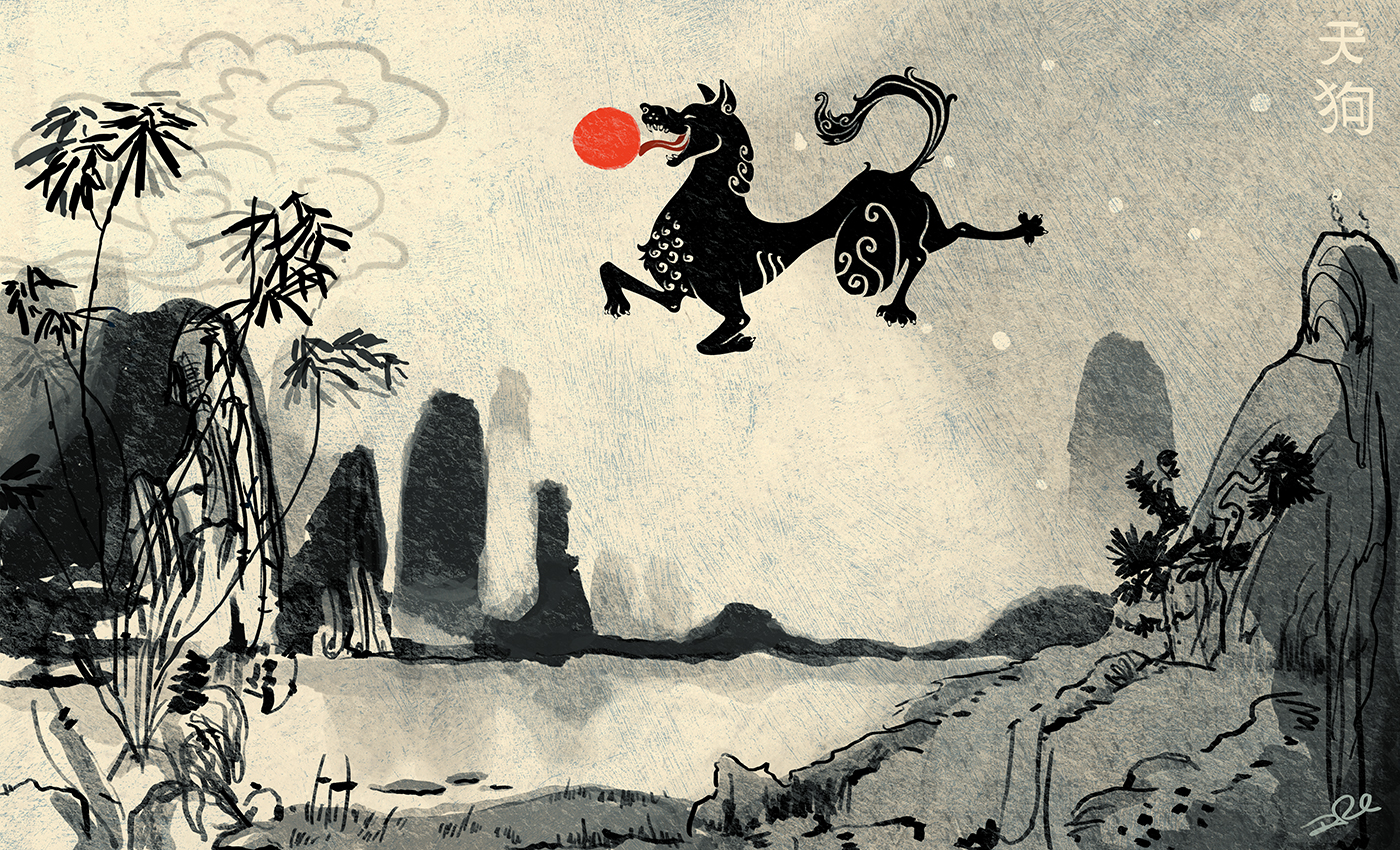 Many folk beliefs involving eclipses foresee doom and destruction, but not all. Many attributed the phenomenon to mythical creatures stealing or eating the sun or moon.

That one shows a connection between science and folklore, and here's one that encourages peacemaking:

The Batammaliba, who live in Benin and Togo, used a solar eclipse as a teaching moment. According to their legends, an eclipse of the Sun meant that the Sun and the Moon were fighting and that the only way to stop them from hurting each other was for people on Earth to resolve all conflicts with each other.

Click through to read more legends as well as modern superstitions! This page on historical eclipses also has some interesting information on different beliefs/results from eclipses.
Posted by Kristin at 9:56 AM No comments:

Merpeople are such a fascinating study- I've been reading all about different tales and beliefs about the Sea Spirits of Scandinavia in Surlalune's Mermaid Tales From Around the World. 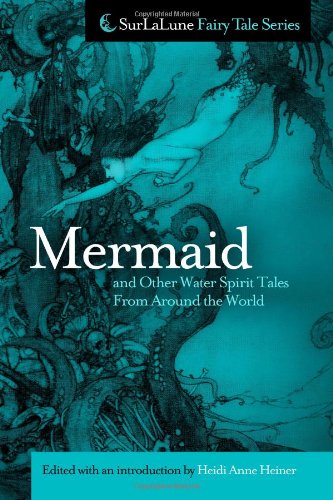 *The children of merpeople are called Marmaeler in Norway. If caught, they can give you knowledge of the future, but it's still best not to seek them out-seeing a Mermaid or Merman is a sign of a coming storm, and harming them is dangerous

*On the other hand, they can also help to protect people who have shown them kindness. There's one story from Norway in which a fisherman saw a merman shivering from cold and gave him his hose to wear-later the same merman warned him of a coming storm and he got to shore just in time.

*The River Spirit is called a Neck. He might sit on the water with a red cap on his head (interesting potential connection to Red Riding Hood??), but may also appear as a centaur, horse, or an old man with a long beard. They might punish cruel humans, such as haughty women who spurn their lovers, but may also themselves fall in love with a human woman and be a kind suitor.

*Necks are also excellent musicians, playing gold harps. It's possible to get lessons from them, if you present them with a black lamb and the promise of salvation. *Sea creatures seem very concerned about their salvation in Scandinavia. There are multiple tales in which a neck cries and flings away his harp when told he will not be saved, but they cheer up if told that the opposite is true. In one story, a Neck asks a priest if he will have salvation, and the priest replies, "sooner will this cane sprout flowers." However, later on, his cane DOES sprout flowers, so he goes back and tells the Neck. This sheds some light on the motivation of Andersen's Little Mermaid-we often forget that she sacrifices her voice and the pain of her legs not just for the chance of love, but also to gain immortality.

*There is a tale in Sweden with many variations, "The King's Son and Messeria." In it, a Mermaid has power over a young boy, usually because she tricks his parents into promising him to them (using the old "promise me what is under your girdle" trick to a woman who doesn't yet know she's pregnant, "promise me the first thing you meet on land," or just plain old "give me your firstborn or you'll die in this storm at sea.") They attempt to keep the boy away from the Mermaid, either keeping him in a high tower or away from water, but of course he eventually ends up close to the water and she drags him into her underground kingdom. There, he meets a beautiful young girl, also a captive of the Mermaid, and falls in love. The Mermaid gives him impossible tasks to do. Usually, impossible tasks in fairy tales are made possible because the protagonist was kind to animals along his or her journey, and they help them, so it almost feels like they were really a test of character-anyone who shows kindness will succeed-but these were truly meant to be impossible. Only by his lover helping him with magic, unbeknownst to the Mermaid, does he succeed. Mermaids in these stories are kidnappers; cruel, and unambiguously villains, functioning as a witch would in similar tales. The lovers manage to escape her, and sometimes she dies in spectacular ways-bursting because she tries to drink the sea (because the lovers transformed into ducks) and took in too much water, or splitting in two when she sees the sun.

*There's a creepy Sea Nymph in Sweden whose hand will appear through a door in a fishing hut where the fishers are all asleep for the night. Wise fishers know to ignore the hand, but a boastful man claimed he wasn't afraid; he took the hand and it drew him out, and he disappeared for three years. He returned on the day of his wife's remarriage, for he was presumed dead, but disobeyed the Nymph's warning not to step inside the church, and he died three days later.

Like any creatures, Sea folk can be kind, cruel, or neutral; but their supernatural abilities and elusive nature make them alluring and mysterious. If you happen to be in Scandinavia, especially around the water, watch out for the Sea Nymph, take cover if you spot any merpeople while out on the water, but assure any Necks who ask you that they can indeed have salvation :)

*I have already posted on the Danish mermaid tales found in this book, if you want to read about more Scandinavian sea creatures!
Posted by Kristin at 4:20 PM 1 comment: