This month I checked out Christmas: A Social History by Mark Connelly from my library, which I recommend to anyone who enjoys learning about Christmas but might tire of the traditional feel-good stories in which a person's character and morality can supposedly be measured by their level of Christmas spirit. (Don't get me wrong, I watch each classic Christmas special religiously every year...) This book takes a historical-social approach, analyzing Christmas traditions and what they reflect about the society at the time, focusing on the English perspective.

I didn't expect to find fairy tale references in it, but a large part of the historical Christmas celebrations in England were pantomimes, some of which focused on fairy tale plots. Just further evidence of how fairy tales are altered to fit moods and attitudes of the culture that creates them:


"E. L. Blanchard wrote Faw Fee Fo Fum; or, Halequin Jack, the Giant Killer in 1867 for Drury Lane. The pantomime starts on the Giant's Causeway, showing the giant leaving Ireland to come to England. This seems to play on long-standing fears of Ireland as a staging-post for invasions of England. England is portrayed as the home of chivalry and merriment...When Jack realizes that the nation is in peril from the giant and sees the glory of the Duke's retinue he vows to become a knight-no rejection of aristocratic values here. Jack then goes off to defeat the giant and is feted as a glorious knight...He also becomes a hero in Ireland where the fairies and leprechauns are glad to be rid of the tyranny of the giant, thus sending a ressuring message about the unity of the two nations. Jack sums up the Victorian belief in the ancient English liberties and tells the audience: 'We English form a curious community/No tyrant makes us prisoners with impunity.' " 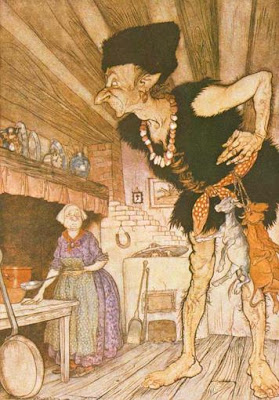 This was not the only Jack and the Beanstalk-themed pantomime; Arabian Nights were also popular source material (these fairy tales were also mentioned by Charles Dickens in his "A Christmas Tree", proof that they were both very popular in England at the time). Interest in China and the East had widened as trade between the countries did, evidenced in the fact that the names used in plays about Aladdin usually had to do with tea: Widow Twankay (a famous port), Tealeaf, Souchong (a tea leaf with a smoky taste because of the affects of being exposed to fire on the long journey from the east), and Mazawatea.
Posted by Kristin at 11:28 AM