Sometimes I read about the evolution of fairy tales and how the Cinderella characters have become more and more passive (like this article), and from the examples cited I don't see a huge difference. People will contrast older versions of Cinderella like to the Perrault/Disney and say that historical Cinderellas were so proactive and resourceful and got herself out of her mess. But really all she did was ask the spirit of her dead mother-whether a spirit or animal helper or fairy godmother or crew of singing mice, Cinderella doesn't ever actually make her own dress, she always has help. Can we really fault the Perrault/Disney Cinderella for not being aware that she had a magical helper?

Not that I support passive heroines or disagree with the above article I cited (although I always feel the need to point out that, historically, there was really no option for lower class females to ever end their servitude) or that Disney couldn't have made better choices in his version, but I think Cinderella isn't the best example of female characters who got dumbed down.

However, as I read through the earliest version of Rapunzel, Petrosinella, from Basile's Pentamerone (1634), I was really struck by what a clever and resourceful heroine Petrosinella is, in stark contrast to later versions of the tale. In this case, she really does use her instincts and wits to get her own happy ending. 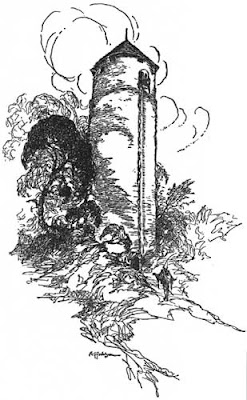 Petrosinella's captivity is a little more traumatic than Rapunzel's-she isn't given over at birth. Her mother has the same cravings, steals the petrosinella, and makes the promise to an ogress that she can have her unborn child, as she is threatened with death if she doesn't. The child Petrosinella lives with her parents, but every day as she passes by on her way to school, an ogress whispers at her, "tell your mother to remember her promise." The unknowing daughter repeats this to her mother day after day, until finally her mother, with no other attempts to keep her daughter, tells her child to reply, "Take it!" When she does so, the poor girl is taken by the hair and locked in a tower in the woods. I tend to think of Rapunzel as someone who has always been sheltered from the world and doesn't know what's out there, but Petrosinella knows what it's like to have a family and friends and now has to lose everything for no apparant reason. (Really, I can't imagine the ogress's motivation here. Props to Disney for giving Mother Gothel a good reason to want a girl in a tower.) 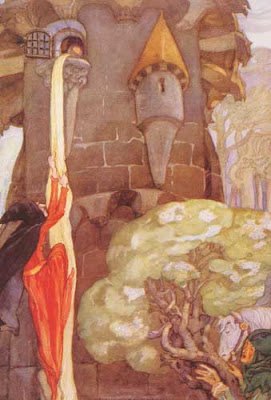 Prince sees Petrosinella and instantly falls in love. Petrosinella, however, isn't stupid. She knows to give the ogress poppy juice that she and her lover may have trysts in the tower. The lovers are so clever the ogress doesn't discover their love until a gossipy friend of hers warns her that the couple are getting pretty serious.

Now, other versions have the witch temporarily victorious as the lovers are separated and have hardships and whatnot, and it's usually because Rapunzel is ignorant (she's pregnant and doesn't know why her belly is growing) or thoughtless (mentions one day that the witch is much harder to pull up than the Prince), but Petrosinella doesn't even let the ogress get the upper hand. Petrosinella "had her ears wide open" and was suspicious that the ogress would find out (very impressive coming from a girl who can't leave her tower) and arranges an escape before the ogress has a chance to punish them. Petrosinella is under a spell and cannot leave the tower-implying that she would have already left otherwise-unless she is holding three gallnuts in her hand which were hidden in a rafter in the kitchen. 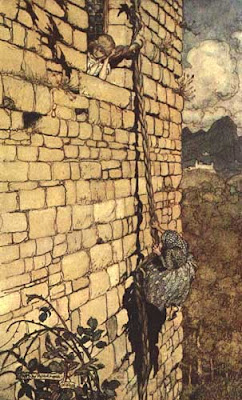 But clever Petrosinella already knows about the spell and counterspell, so she has her Prince climb up and get the nuts, and they're off. The ogress starts to chase them, and every time she gets close Petrosinella throws a gallnut in her path and it turns into something. I imagine this part to be the 17th century version of an action sequence in a movie, as the witch has to cleverly distract all the fierce animals sent her way. In the end the last animal eats her and the free lovers are married in the Prince's Kingdom.

I noticed after drafting this post that I never mentioned the hair for which Rapunzel is so famous. It's there in Basile's story, but really this version could stand on its own without it. In other versions, the Prince meets the maiden by calling out the famous "Rapunzel, Rapunzel, let down your hair" as the witch does, and she is startled when a young man appears instead of the witch. Again goes to show how later Rapunzel isn't the sharpest knife in the drawer since she can't even tell the difference between their voices, as opposed to Petrosinella who is fully aware when she allows the Prince to enter her tower.
By the way, Petrosinella is the Italian word for parsley, which I find funny because my mom is allergic to parsley.