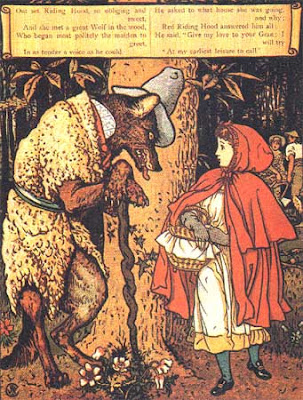 After mentioning my latest reading to a friend, he asked me to give the nutshell version of the history of Little Red Riding Hood, which is really quite difficult to do. But in church ministry I've been told you don't really understand theology until you can explain it clearly to a five year old, and I think the same goes for pretty much any academic subject-if you can't explain it in layman's terms, you don't have a full understanding. So here's my very extremely nutshell version, which really applies to the history of any fairy tale:

Orally told tales: were humorous and often racy, meant purely for entertainment's sake
Literary tales: Oral tales written in literary form by Perrault and the Grimms-made didactic and given morals which often don't even make sense within the tale. Made more condescending towards women and children.
Modern interpretations: Reaction against Victorian era. Traditional morals and suppositions challenged; female characters empowered.

Real fairy tale critics and academics may find fault with this, but that's how I understand it at least.

Now for the slightly less condensed version:
There's a version of LRRH called "The Story of Grandmother" which was published in 1951 but believed to have been originally recorded in 1885 and orally cirulated before then. In this version there is no prohibition against straying from the path or talking to strangers, and no judgement given the protagonist (who does not actually have a red hood yet, she is merely "the little girl"). This girl ends up unknowingly (or knowingly? there is a cat who calls her a slut for doing this) eating and drinking the flesh and blood of her grandmother, which the wolf has already killed. Then the wolf tells her to undress, and for each item of clothing, she asks where she should put it, to which he replies, "throw it into the fire, my child. You won't be needing it any longer." After the usual "what big ____ you have," with the "the better to _____ you with" response, the girl escapes by claiming to need to relieve herself, and untying the rope the wolf put on her when she got outside.

Perrault's version of the tale from 1697 features a girl, "the prettiest you can imagine," who did not know it was dangerous to talk to wolves, who instead of escaping was gobbled up by the wolf. The tale ends there, with a moral comparing predatory gentlemen to wolves, and advising women to be cautious. 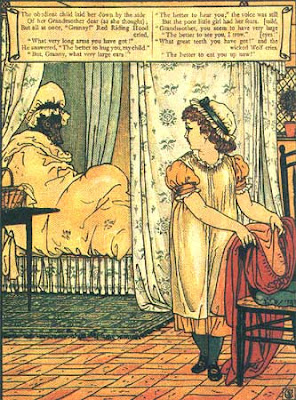 The Grimms (1812) give the heroine a prohibition against straying from the path, but the given reason is so that the bottle of wine for grandmother doesn't shatter. But shattering wine bottles have nothing to do with which path to take, and neither does telling a wolf where your grandmother lives, so the intended moral about obeying parents doesn't really make sense. But this Little Red fares better than Perrault's, for she and her grandmother are rescued from the belly of the wolf by a hunter.

Modern critics are very upset by the helplessness and stupidity of the females in the above two versions and love the heroine of the first one, who Jack Zipes calls "forthright, brave, and shrewd" and Maria Tatar says is "an expert at using her wits to escape danger." But let's be honest here: this version has nothing to do with women's empowerment. This heroine also drinks her grandmother's blood and eats her flesh (as if you wouldn't taste the difference), doesn't appear to notice that her grandmother is a wolf until he says his teeth are for eating her, and burns each of her articles of clothing before getting into her grandmother's bed. Yes, she does escape on her own, but this tale wasn't meant to prove a point or be consistent with the capabilities of any gender or tell a moral -it was just meant to be amusing, and I think it succeeds at that. I should point out that Tatar includes* an Italian and an Asian version where the heroine also uses her wits to escape, but both are dated after Grimms, so I don't know how authentic they are. 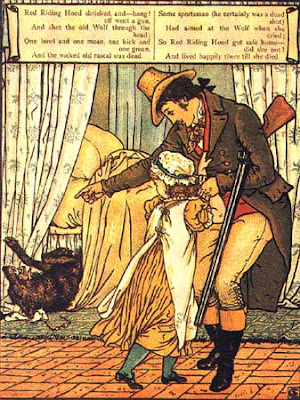 But as far as Perrault and the Grimms are concerned, I think Little Red Riding Hood's downgrading to foolish, helpless character has as much to do with age as gender. It was totally in keeping with Victorian children's literature to feature a child (of either gender) who is severely punished for disobeying their parents. The Victorian attitude towards children is really quite condescending-there was no consideration that a child could make the right choice on their own, but has to be terrified into obeying. In this tale it's the foolish child and the old woman who have to be rescued by the adult, not just the women who need to be rescued by the man. Feminism is a bigger deal right now than ageism so we tend to miss that aspect of it.

Many critics have read messages into Little Red Riding Hood, yet each reading seems to be completely different from, if not contraditing, each other. Eric Fromm finds the tale "the expression of a deep antagonism against men and sex," Susan Brownmiller finds it perpetuates "the notion that women are at once victims or male violence even as they must position themselves as beneficiaries of male protection." Yet Alan Dundes thinks it's mainly about children's anxieties about being devoured. While Angela Carter delighted in her grandmother's tickling and pretending to eat her as she told the story, Luciano Pavarotti recalls dreading Little Red's death and anxiously awaiting the arrival of the hunter (note that, even as a male, he "identified with Little Red Riding Hood" and had the same fears). Part of your interpretation of a tale depends a lot on which version you're going off of, and who knows which, if any, are "authentic" (how would we even define that? I won't get into that right now). It's almost as if the only thing anyone can know about fairy tales for sure is that we can't really know anything about fairy tales.

*Information from The Classic Fairy Tales, edited by Maria Tatar. I used Surlalune's Library Essentials posts from last October to create my Christmas wishlist and this book was one of my presents. Thanks for doing that, Heidi!


Images by Walter Crane
Posted by Kristin at 12:35 PM