This German tale is an interesting (and at times disturbing...) combination of "Beauty and the Beast" with "The Frog Prince". From Carl and Theodor Colshorn (from Ashliman's Frog King page)

Once upon a time there was a merchant who had three daughters, but his wife was with God. Once he planned a journey across the ocean to a foreign land in order to bring back gold and other valuable things. He consoled his weeping children, saying, "I will bring back something beautiful for you. What do you want?"
The oldest asked for a silk dress, "and it must be made of three kinds of silk."
The second desired a feathered hat, "and it must have three kinds of feathers."
The youngest finally said, "Bring me a rose, dear father, and it must be fresh and have three colors."
The merchant promised to do this, kissed his daughters, and departed. After arriving in the foreign land, he ordered the dress of three kinds of silk for his oldest daughter and the hat with three kinds of feathers for the second one. Both were soon finished, and of seldom splendor. Then he sent messengers throughout the entire country to seek a three-colored rose for his youngest and dearest daughter, but they all returned empty handed, even though the merchant had promised a high price, and even though there were more roses there than there are daisies here.

Sadly he set off for home and was downhearted the entire voyage. This side of the ocean he came to a large garden in which there was nothing but roses and roses. He went inside and looked, and behold, on a slender bush in the middle of the garden there was a three-colored rose. Filled with joy, he plucked it, and was about to leave, when he was magically frozen in place.
A voice behind him cried out, "What do you want in my garden?" He looked up. A large frog was sitting there on the bank of a clear pond staring at him with its goggle-eyes. It said, "You have broken my dear rose. This will cost you your life unless you give me your youngest daughter to wife."

The merchant was terrified. He begged and he pleaded, but all to no avail, and in the end he had to agree to marry his dearest daughter to the ugly frog. He could now move his feet, and he freely walked out of the garden. The frog called out after him, "In seven days I shall come for my wife!"

With great sorrow the merchant gave his youngest daughter the fresh rose and told her what had happened. When the terrible day arrived, she crept under her bed, for she did not at all want to go. At the hour of noon a stately carriage drove up. The frog sent his servants into the house, and they immediately went to the bedroom and dragged the screaming maiden from beneath her bed, then carried her to the carriage. The horses leaped forward, and a short time later they were in the blossoming rose garden. In the middle of the garden, immediately behind the clear pond, there stood a small house. They took the bride into the house and laid her on a soft bed. The frog, however, sprang into the water. 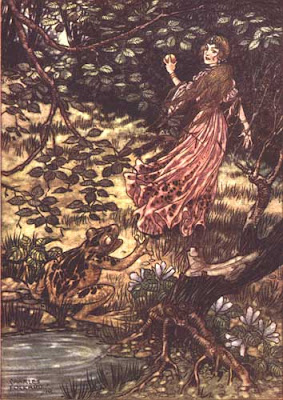 Darkness fell, and after the maiden had awakened from her unconsciousness, she heard the frog outside singing wonderfully sweet melodies. As midnight approached, he sang ever more sweetly, and came closer and closer to her. At midnight the bedroom door opened, and the frog jumped onto her bed. However, he had touched her with his sweet songs, and she took him into bed with her and warmly covered him up.
The next morning when she opened her eyes, behold, the ugly frog was now the handsomest prince in the world. He thanked her with all his heart, saying, "You have redeemed me and are now my wife!" And they lived long and happily together.

Image of rose from here, The Frog Prince by Charles Folkard
Posted by Kristin at 9:47 PM