Perrault's famous version of Donkeyskin was dedicated to a friend of his, the Marquise de
Lambert, who was in the process of gaining back rights and property that were hers by birth. It's fitting that the heroine of the tale should be first deprived of her royal status, but at the end rewarded with the royal rights and privileges she started with, in the classic restoration fairy tale plot. 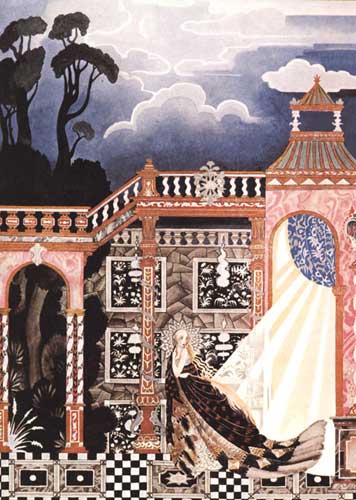 At the time, the term "donkeyskin story" was used to refer to any amusing tale with magic in it, not necessarily because it contained a donkeyskin (maybe like how most fairy tales don't actually have fairies). In using a donkeyskin in his donkeyskin story, he was making a pun. Other stories did exist with actual donkeyskins in the plot, however-including the frame story to "Cupid and Psyche" in Lucius Apuleius' Golden Asse (the story that is thought to be the earliest literary precedent to Beauty and the Beast). It's probable that Perrault was familiar with this, but the combination of a donkeyskin and incest driving a royal girl to servanthood was taken from two earlier tale versions by Straparola and Basile. Though Perrault added his own take to the tale, the influence of the earlier writers' tales is fairly obvious. As is characteristic of the authors' tale collections as a whole, Straparola's and Basile's tales were full of bawdy and cruder humor, while Perrault made the story more acceptable to a dignified, refined French audience in the 1690s.

Donkeyskin is most noteable among current audiences for its shocking attempt at incest. Incest was not entirely uncommon in midieval literature, but in Donkeyskin it is noteable because it was not only ultimately unsuccessful, but in the end deeply repented (repentance itself is very rare in fairy tales-the villains usually meet grisly punishments with no thought given to a possible change of heart).