The Underground Kingdom: Part I

I am beyond thrilled to finally own my first (of many, I hope!) book in the Surlalune series! My favorite fairy tale other than Beauty and the Beast is the Twelve Dancing Princesses, and it's incredibly hard to find anything written about it, so being able to delve into multiple variants, most of which were completely unfamiliar to me, was like discovering hidden treasure!

One of the things which always fascinated/mystified me about this tale was the nature of the underground kingdom the Princesses travelled to each night-why did it need to be destroyed? Was it evil in any way other than being an inconvenience due to the rate at which the Princesses went through dancing shoes? The Grimm version provides no explanation. Fortunately the variants from around the world did provide some insight.

In  many versions of this tale, the underground kingdom is more specifically defined as hell, or a land of giants, trolls, etc. In Afanasyev's tale from Russia, the Princesses went to the home of the Accursed Tsar.

Some versions explain the nature of the Princess' curse. In Romania, "these Princesses were fore-doomed, and they couldn't marry until someone was found who would guess their doom and make one of them love him. The doom that weighed upond them was a passion for dancing. They were mad on dancing, and so every night they wore out a new pair of white silk slippers each."...later it is implied that another side effect of the curse was that they had icy hearts and were incapable of love, and that the music in the castle was enchanted such that any listener was forced to dance, whether willing or not. 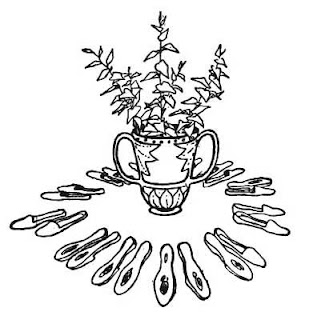 A German tale (not the Grimms') describes the spell: the princesses had been dancing for five years. If they had danced one more year, they (the Enchanted Princes, I assume) would have been saved. The other alternative was for the princesses' heads to be cut off, as they were, for denying everything. The exact words say the elder sisters had "allowed" their heads to be cut off, so I guess they sacrificially saved the princes from enchantment? Yet they are still punished and the daughter who confesses rewarded.

Another story from Romania explains that the Princess' dancing partners were the "Emperor's sons who had tried to discover the secret of the Princesses. These latter had enticed them to a midnight expedition, and had given them to drink at table, an enchanted beverage, which had frozen their blood, killed in them every sentiment of love, every rememberance, or worldly desire, leaving them only the ardent pleasure of the dance." Which begs the question...where did the sisters go before there were dancing partners? Much like Bluebeard and the question of what caused him to kill his first wife, before there was a room of dead bodies to discover... 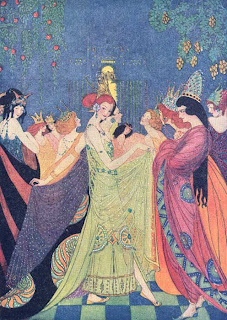 In Hungary, the girls travel by broom to hell, where they dance on a floor full of razors-which explains why these three daughters destroy three hundred pairs of shoes. The girls in this story are rewarded according to their willingness to go-the older two had a lover and a son in hell and were killed, but the youngest was pure because she had no one there. Another very similar tale is found in the Czech Republic.

Yet another Hungarian story describes sisters which spend the night dancing with fairy youths, who are killed (except the youngest) for witchcraft.

I started this post and realized there are so many interesting variants that this really needs to be split up into two posts! More secret underground kingdoms to come soon-