Edmund Dulac
The brothers Grimm are pretty well known for gathering tales from around Germany (although their methods may not have been the most accurate). And in general, their work was well-received-their Kinder Und Hausmarchen was popular among scholars as well as casual readers and children. Although a few people thought their tales were inappropriate, they solved that problem by making the tales more appropriate according to standards of the time.

Collecting folktales, a seemingly innocent occupation, was not as easy to do in other parts of the world. In Russia, for years oral storytellers were very popular. Storytelling was an actual occupation, as people would give them food and drink for accompanying them at their monotonous tasks and entertaining them. From peasants to nobility (such as Count Leo Tolstoy and Ivan the Terrible), children would fall asleep listening to stories. This embracing of storytelling was not always universal, like when tsar Alexei Mikhailovich ordered all the storytellers to be rounded up and their tongues cut out. He proclaimed in 1649: "Many persons stupidly believe in dreams, in the evil eye and birdsong, and they propound riddles and tell fairy stories. By idle talk and merry-making and blasphemy, they destroy their souls." 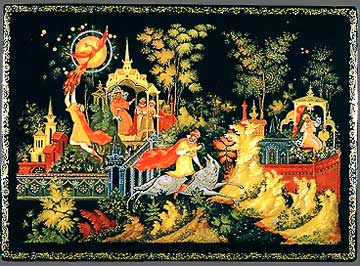 However, for most of Russian history oral tales were a way of life. Written tales, however, were a different story. The Russian Orthodox Church was very strict in its censoring. They believed that written language should be reserved for sacred religious writing and not for pagan stories. An Englishman, Samuel Collins, managed to publish some Russian tales he had collected in London in 1671, but it was a long time before Russian tales were published in Russia.

The great author Pushkin was condemned for trying to imitate the fairy tale in his writing. In 1838 five Russian stories were published by Bogdan Bronnitsin. But it was Alexander Afanasyev (1826-71) we have to thank for giving us such a complete collection of Russian tales-in fact, the largest group of fairy tales in the world. Afanasyev published eight volumes of tales. Students of fairy tale history may be aware that the Grimms had seven editions of their KHM, but the core stories remained the same. They added and deleted a few tales, but mainly edited the stories that were already in the collection. Afanasyev, however, published new tales in each collection, totalling 640 tales. Also unlike the Grimms, he did not alter or edit the tales he received. He did not record most of them himself, but other friends and colleagues sent him tales. His tales also cover a vast distance and include many Russian districts, whereas the Grimms mainly gathered from their family friends, who were not even necessarily German in origin.

Afanasyev's first volumes were not all well-received-the Moscow Metropolitan Filaret claimed the tales were "blasphemous and immoral. They offend pious sentiment and propriety. Religion must be safeguarded from such profanity." Afanasyev unapologetically retorted, "There is a million times more morality, truth and human love in my folk legendds than in the sanctimonious sermons delivered by Your Holiness!" 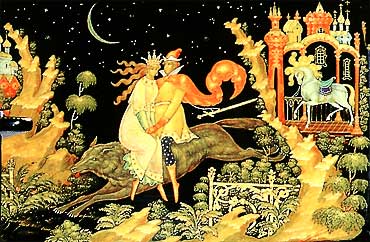 To make matters worse, the freeing of the peasants from serfdom in 1861 created much violence and discontent in all classes, all over Russia. This included even more severe censorship. In 1860 Afanasyev's publisher was raided and one of his manuscripts destroyed. Afanasyev left the country for a while, and in Europe he had greater ability to publish things that would have been banned at home.

Upon returning, he was evicted from his house and dismissed from his job. He was forced to work as an assistant clerk in a court. He kept working on his own projects, and 1865 the press censorship was reformed and he was able to resume publishing works, although not genuine folktales. Sadly, he was ill and his living and working conditions were hard on him. He died in relative obscurity and in poverty at the age of 45.

Makes me all the more grateful for freedom of the press!

*Information from "Russian Fairy Tales and their Collectors" by James Riordan. Found in A Companion to the Fairy tale, edited by Hilda Ellis Davidson and Anna Chaudhri