Once Upon a Grind by Cleo Coyle

Spotted this book in the mystery section of my library, Once Upon a Grind by Cleo Coyle. Book description:

"When coffeehouse manager turned amateur sleuth Clare Cosi serves "magic" beans for a Fairy Tale Fall event, she brews up a vision that leads to a sleeping beauty in Central Park; a big, bad wolf of Wall Street; and an East Side enclave with storybook secrets... 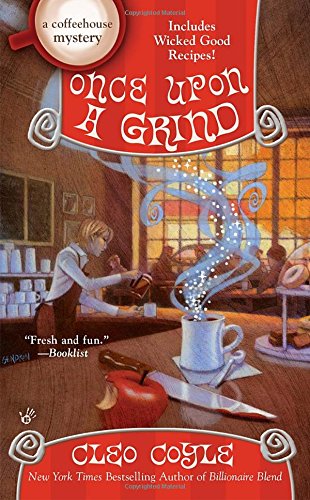 Fairy tale fever has descended on New York City. Broadway fans are flocking to Red Riding Hood: The Musical; museums are exhibiting art inspired by the Brothers Grimm; and Clare Cosi and her merry band of baristas give their coffee truck a "Jack and the Beanstalk" makeover for a Central Park festival. Clare's coffee hunter ex-husband contributes a bag of African beans with alleged magical properties. His octogenarian mother entertains customers with readings of the grinds, but Clare remains skeptical--until she receives a vision that helps her find a young model's body in the park's woods.

The police dismiss "sleeping beauty" as the victim of a drug overdose. Then Clare uncovers evidence that points to a list of suspects--from a New York Giant to quite a few wicked witches--and a cold case murder that reaches back to the Cold War. Now Clare is really in the woods with a dangerous predator on her heels and an investigation that leads from a secret Prince Charming Club right back to her own NYPD detective boyfriend. If she doesn't solve this mystery, those magic beans predict an unhappy ending."

I'll be honest, it's not the best writing ever (although pretty typical for most current mystery novels), but for a book that features three of my favorite things-murder mysteries, coffee, and fairy tales, I was willing to give it a chance. The book begins with the main character serving coffee at a Fairy Tale Festival, and the fairy tale references don't end there. In fact I was pretty impressed at how the author was able to incorporate so many fairy tale characters and motifs into the story. It was a fun, easy read. And, as the cover promises, there are recipes in the back, although I can't say whether or not they're "wicked good" as claimed, since I didn't try any. But some are fairy tale themed! Snow White Chocolate Mocha, Cinderella's Pumpkin Cake, Poisoned Apple Cake, etc. Also on the subject-this sign is on the coffee maker at my office. I love those fairy tale connections that help to show how enchanted real life is too-coffee is pretty magical, when you think about it!
Posted by Kristin at 11:32 AM