Some folktales can really be classified as ghost stories more so than our traditional idea of fairy tales; I thought for October it would be fun to do a series featuring some of these more chilling fairy tales!

First up, from the Grimms, "The Stolen Pennies" (or Stolen Farthings):

Once a father was seated at the dinner table with his wife and children. A good friend who had come to visit was eating with them. While they were sitting there the clock struck twelve, and the stranger saw the door open and a very pale little child dressed in snow-white clothes come in. It neither looked around, nor did it speak, but went straight into the next room. Soon afterwards it came back, and just as silently went out the door again.

On the second and on the third day it came back in exactly the same manner. Then the stranger finally asked the father, whose beautiful child it was that went into the next room every day at noon.

"I did not see it," he said, adding that he did he know whose child it might be.

The next day when it again came, the stranger pointed it out to the father, but the latter did not see it, nor did the mother and the children see anything. Then the stranger got up, went to the door of the room, opened it a little, and looked in. There he saw the child sitting on the floor, and busily digging and rooting about in the cracks in the floor. When it saw the stranger, it disappeared. 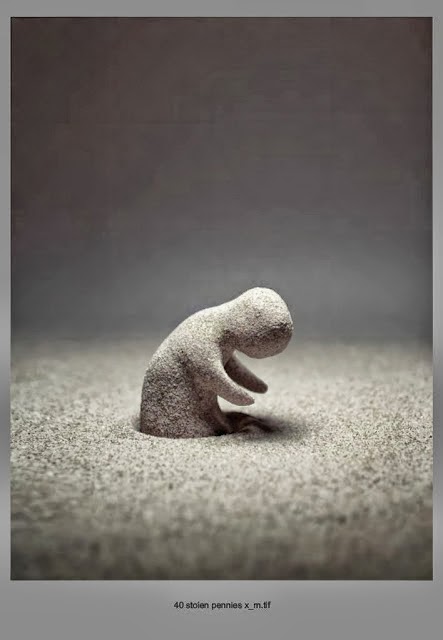 He now told what he had seen and described the child exactly. Then the mother recognized it, and said, "Oh, it is my dear child who died four weeks ago."

They ripped up the floor and found two farthings which the child had once received from its mother to give to a poor man. It, however, had thought, "With that money you can buy yourself a piece of zwieback," and had kept the farthings, hiding them in the cracks in the floor.

Therefore it had had no rest in its grave, and had come every day at noon to look for these farthings. Then the parents gave the money to a poor man, and after that the child was never seen again.
Posted by Kristin at 9:54 AM