"Fairy tales don’t tell children that dragons exist. Children already know dragons exist. Fairy tales tell children that dragons can be killed."- G. K. Chesterton
Dragons are part of the stereotyped fairy tale story-hence the quote by Chesterton, and the fact that the image above is listed under "fairy tale figures" on this site. But can you think of any fairy tales that feature dragons? If you thought of Sleeping Beauty, that was only Disney's invention to have the Prince fight Maleficent as a dragon. 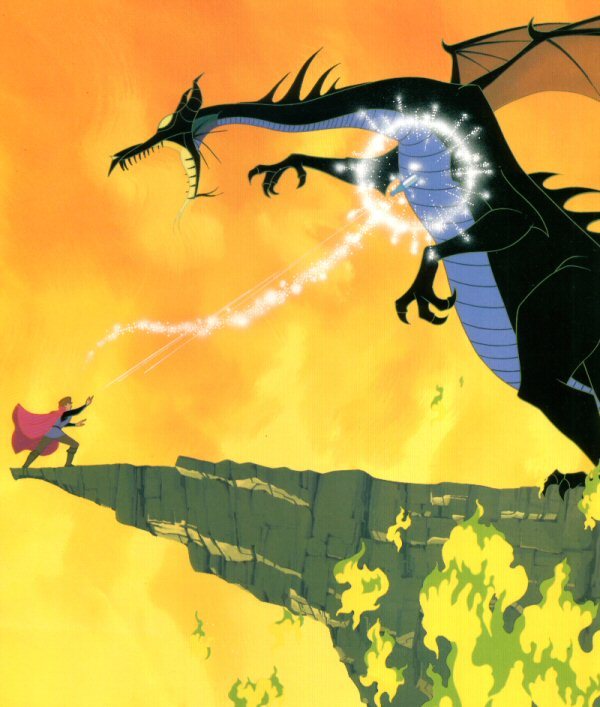 I can only think of a very few fairy tales that actually have dragons in them, and they're very obscure. However, this little Serbian tale may give us insight into an example of the dragon stereotype:
There was an emporer with three sons. One day the eldest was hunting and saw a hare spring out of a bush, and chased it. Only the hare was really a dragon, and it ate him (killer rabbit from Monty Python, anyone?). The same thing happened to his middle brother. The third son went hunting, but chose not to follow the hare. He went to hunt elsewhere and returned to find an old woman. He greeted her respectfully, and she told him that the hare was really a dragon who killed many people. The prince wished to free the old woman from the dragon, and instructed her to flatter the dragon into telling her where his strength was kept. Wherever he told her, she was to fondle and kiss that place as if out of love.
The old woman did as she was told. The dragon told her false locations twice, but believing her show of love for him, he told her the true location of his strength: in another emperor's court, in a lake, in a dragon, in a boar, was a pigeon, and that pigeon was the dragon's strength.
The prince set out for the kingdom, disguised as a shepherd, and offered his service to the emperor of the other land. The emperor sent him out where no other shepherd had returned. The prince brought with him a falcon, hounds, and a bagpipe. He called to the dragon, "Dragon, dragon! come out to single combat with me to-day that we may measure ourselves together, unless you're a woman." (In the book this tale is in, there's a footnote here that explains, "This is intended as an insult.")
The dragon responds to the taunt. They wrestled till afternoon, when the dragon requested to moisten his head in the lake. The prince claimed "if I had the emperor's daughter to kiss me on the forehead, I would toss you still higher." They separated, and the people of the kingdom were astounded to see the new shepherd return alive. The emperor sent two grooms to watch what he did, and the same thing happened the next day. The emperor sent his daughter to go with him on the third day, who went weeping, but her father had full faith in the shepherd.
The same thing happened the next day, only after the shepherd taunted the dragon with the kiss, the emperor's daughter ran up and kissed him. The prince threw the dragon p in the air, and when it fell it burst into pieces. The boar sprang out, and the prince shouted to the shepherd dogs to hold it. They tore it to pieces, and out came the pigeon. The prince loosed the falcon, who captured the pigeon. Once the prince asked the pigeon where his brothers were, he killed the pigeon. The prince then married the princess and released his brothers.
Posted by Kristin at 9:00 AM