I started subscribing to Faerie magazine not too long ago. The latest issue has an article on the history of Goldilocks and the Three Bears, which is an extension of the information that can be found on surlalune. Goldilocks is a fairy tale I probably wouldn't have researched on my own, so I was glad to see it in the magazine and learn a little about its history. 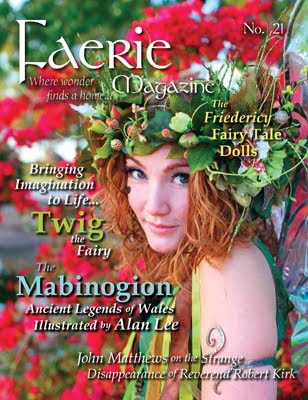 The earliest known manuscript of this tale was a little illustrated book done in 1831 by Eleanor Mure made for her nephew's birthday. The story was referenced in 1813 as well so we know it's been around since before then.
The older tales we know of centered around the bears themselves, and the intruder was actually an old woman. The bears are the protagonists and the intruder the antagonist (reasonably so, when you think about it). Robert Southey's 1837 version of the story (which for years was thought to be an original invention, before the Mure version was discovered) includes all male bears, whose voices were represented by different fonts. Note to the music teachers of the world: you can use this fairy tale as a lesson plan with kindergarteners by having them learn about high and low sounds, and associating high with small and low with large.
Mure's tale has the bears attempting in vain to murder the old woman-their inability to do so probably because she was a witch.

The switch from evil old woman to adorable little girl was began with Joseph Cundall in 1850, who, when explaining why he made the change, wrote that the tale was better known as SILVER-HAIR (although the illustrations to his tale show a little brunette), and that there were plenty of stories with old women (although, I would assume there were also already plenty of tales with little girls).

The name "Goldilocks" was first used in 1904 and made popular when the version by Flora Annie Steel and illustrated by Arthur Rackham appeared with the now-famous name in 1918. Gradually the three bears became a family and narrators became more sympathetic with the little girl. Sometimes she was punished, but the name of the tale is revealing, because it used to be called "The Three Bears" and is now known simply by "Goldilocks." To some, the little bear is the real protagonist. The change of sympathy from bears to little girl reminds me of the reversible verses from Marilyn Singer's excellent, excellent "Mirror, Mirror" (Buy it now. No, seriously):
ASLEEP IN CUB'S BED,
BLONDE
STARTLED BY
BEARS,
the headline read.
Next day
Goldilocks claimed,
"They shouldn't have left
the door
unlocked."
She ate the porridge.
She
broke
a chair.
"Big deal?
No!
They weren't there."

They weren't there.
No
big deal?
A chair
broke.
She
ate the porridge.
She
unlocked
the door.
"They shouldn't have left,"
Goldilocks claimed.
Next day
the headline read:
BEARS STARTLED
BY BLONDE
ASLEEP IN CUB'S BED.
Heiner mentions a related tale from 1894 in which the trespasser is a fox or vixen-the term "vixen" could have explained the transition from fox to a woman.
Illustrations: Anne Anderson, Arthur Rackham
Posted by Kristin at 2:46 PM

Labels: Goldilocks and the Three Bears