Numbers and the Twelve Dancing Princesses 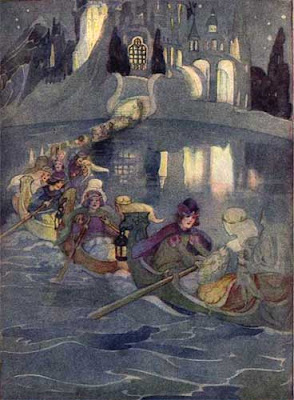 On the Surlalune Annotate Twelve Dancing Princesses page, you can read the Grimms' notes from the versions they heard and used to create their own version. These tales are definitely different than the one we're familiar with-for example, either three sisters who wear out their shoes verses twelve, or one princess who wears out twelve pairs of shoes. Clearly numbers are a significant thing in folklore, but even from the above example you can see numbers seem to be especially prominent in this story's versions, particularly 3 and 12-sometimes you'll see 11 or 13, but these numbers are really meant to be one more or one less than the complete 12. Click through to read the older versions and see more instances of 3s and 12s.

From Heidi Anne Heiner's annotations:
"Three days and nights: The number and/or pattern of three often appears in fairy tales to provide rhythm and suspense. The pattern adds drama and suspense while making the story easy to remember and follow. The third event often signals a change and/or ending for the listener/reader. A third time also disallows coincidence such as two repetitive events would suggest.

The reasons and theories behind three's popularity are numerous and diverse. The number has been considered powerful across history in different cultures and religions, but not all of them. Christians have the Trinity, the Chinese have the Great Triad (man, heaven, earth), and the Buddhists have the Triple Jewel (Buddha, Dharma, Sanga). The Greeks had the Three Fates. Pythagoras considered three to be the perfect number because it represented everything: the beginning, middle, and end. Some cultures have different powerful numbers, often favoring seven, four and twelve. " 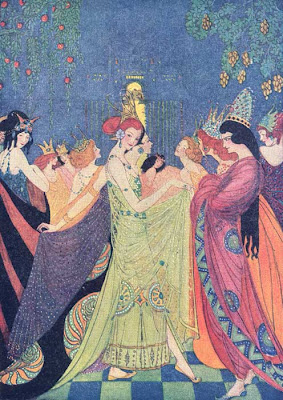 Elenore Abbott
I think I'd have to rank Twelve Dancing Princesses as my second favorite fairy tale, the first being Beauty and the Beast. The secret kingdom and the dancing are definitely elements I love, but I think a more subtle factor may be the ambiguity. Normally, good and evil are very black and white in fairy tales, which I don't necessarily dislike, it's an element of the genre. But the nature of the curse is unclear-if no one were beheaded because of it, would it even be a curse? To quote from Heidi Anne Heiner again: "The callousness displayed by the princesses is often troubling to many critics and readers. Are the princesses really that cruel or are they under an enchantment? The answer is left for your own interpretation"
Posted by Kristin at 8:41 PM