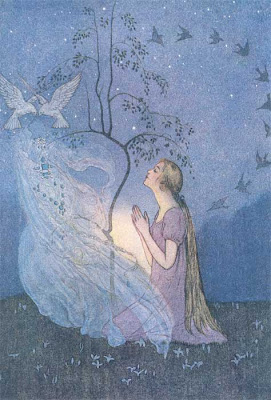 Reader Radha Pandey is doing a project on trees in folklore, myths, and legend, and we've started a discussion in the comments to my post on Juniper Tree, but I wanted to make you all aware of it so we could have more input. So far we've thought of, obviously, the Juniper Tree, as well as Cinderella variants where the tree is a way for Cinderella to communicate with her dead mother and receive gifts from her.

Also, I'm very glad that reader Dawn alerted me to the Grimm tale One-Eye, Two-Eyes, and Three-Eyes because of my interest in beauty standards and society's treatment of people who don't measure up to them. In this tale, which is similar to Cinderella, the stepsisters have one and three eyes, respectively, and mistreat their sister who has two eyes "like regular people." Though it's unusual that Two-eyes is mistreated because she is normal, those who are different are still represented as evil, for ugliness and evil go hand in hand in so many tales. (Two-Eyes, of course, just happens to have great beauty.) But the tree is very significant in this tale as well, for after Two-Eyes' animal helper, a goat, has been killed by her mother, from the entrails springs a magical tree with golden apples. The tree is also the means by which Two-Eyes is made known to a knight that passes by, for the tree will only allow her to pluck fruit from its branches.

In both of these tales the tree is a means of preserving someone's spirit after they've died, and a way of giving help and gifts to the living.

In the Firebird, there is another tree with golden apples, which the Firebird steals. Ivan's catching of the Firebird in the garden kickstarts his adventures.

What else is out there? I may know a little about folklore but virtually nothing about myth and legend.
Posted by Kristin at 1:11 PM