I was initally hesitant to read Valerie Paradiz' Clever Maids, simply because I've already read multiple books on the Grimms and doubted it would contain anything new or different. But this book focuses on the women in Jacob and Wilhelm Grimms' lives, and the women who were really the mostly uncredited contributors to the collection that is the most sold book in the West, other than the Bible. 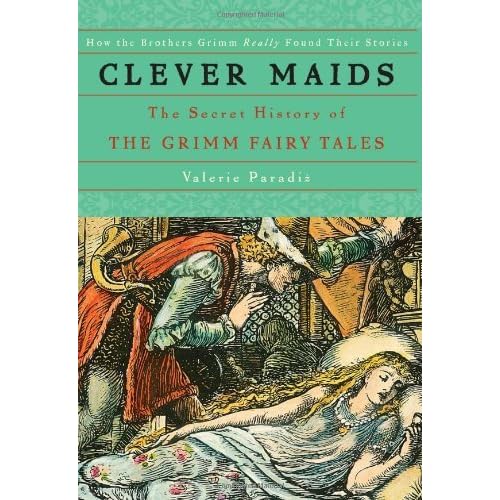 This book has significant things to say, I think, about redeeming the history of fairy tales in light of the feminist arguments that say this collection is outdated and not applicable to the modern reader. It's important to look back and see how far we've come, as a warning and an encouragement. But the gender equality we are so proud of today-that a woman can get the education and career she desires-was simply not even an issue in a time when so many people were fighting for their survival, and any education at all wasn't a given for men, not to mention women. Given that the tales were gleaned from women tellers and not from men trying to put women in their place, the tales actually hold elements of empowering or celebrating women and their work which we tend to be blind to, looking only from the lense of our culture.

Paradiz gives insight into the background of the Grimm family and their acquaintances, and also connects elements of their lives with the tales they immortalized. Whereas other books on the famous collection focus on the stories and refer to the lives of those who collected and contributed only as  secondary importance, this book focuses on the real lives of those who were involved in with the Grimms. What follows is a highly readable book that makes interesting paralells between the facts of the authors' biographies and the elements of the stories they immortalized.

The instance of contributing tales themselves Paradiz compares to the story of the Maiden Without Hands. The story features a daughter who is obedient to her father's rash promise to the devil, to the point of allowing him to chop off her hands-in the story, the father's will is absolute, no matter how cruel. What on the surface makes feminists irate is at least an ironic commentary on not only society but the status of the girls who contributed the stories, and the story form may have been the only way for women who were disadvantaged to cry for help. For example, many Animal Bridegroom stories show fathers who encourage and even force their daughters into marriage with hideous creatures. Why would women circulate such stories among themselves? Many have speculated that such an extreme plot would reveal the cruelty of arranged marriages in such a way that even a chauvenistic society could comprehend.

"The Maiden Without Hands" may well have been the same kind of story-exposing the very real plight of women through shocking means. The practice of denying women rights was evident even in the fact that the Grimms did not credit their faithful sources by name-instead Wilhelm and Jacob took all credit to themselves and the nameless "Folk" to which they attributed their stories. In Paradiz' powerful words: "If the tales contributed by the women collaborators were noted only by the geographical region from where they came, then the deep underlying message of male literary culture was that women as individuals did not matter. Indeed, it was as if the ladies of the Hassenpflug and Wild households had no hands. Although they could read and write, they were nonetheless robbed of holding the symbolic quill of authorship."