The Juniper Tree seems to have a deep appeal to many fairy tale lovers, despite its darker elements. The traditional version is found in the brothers Grimm. 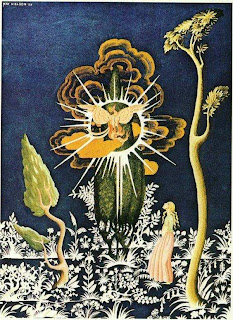 Kay Nielsen
The Rose Tree is an English variant, by Joseph Jacobs, in which the children are gender-reversed -which struck me as odd when the bird gives the brother a present of red shoes. Having the mother hate her daughter seems so predictable in fairy tales, but in Rose Tree some of the elements are especially reminiscent of Snow White.

In Juniper Tree, the mother has no reason to hate her son other than the fact that he came from her husband's first wife. In Rose Tree, the hatred comes from jealousy. As the wife combs out the hair of the daughter, she "hated her more for the beauty of her hair." She sends the girl to fetch a comb, then a billet of wood, then " 'I cannot part our hair with a comb, fetch me an axe...now, lay your head down on the billet whilst I part your hair.' Well! She laid down her golden head without fear; and whist! Down came the axe, and it was off. So the mother wiped the axe and laughed."

Later, the mother cooks the heart and liver of the girl, which is reminiscent of Snow White's stepmother's attempted cannibalism-only this evil mother is successful.

As monstrous as this mother is, the mother in the Scottish tale Pippety Pew has no reason at all to murder her son-who is her full blooded son, not a stepson-other than to hide the fact that she tasted the stew she made for dinner "till she had tasted it all away, and she didn't know what to do for her husband's dinner. So she called Johnnie, her son, to come and have his hair combed. When she was combing his head, she slew him, and put him into the pot." 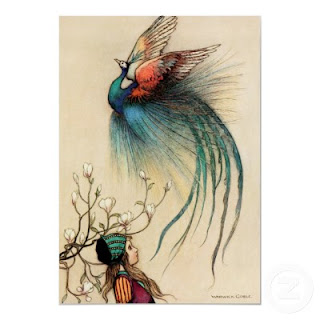 Warwick Goble
Then as the father unknowingly eats his son, the scene is more disgusting than the other variants. The father comes across the different body parts, saying, "surely that's Johnnie's foot" and "That's surely my Johnnie's hand" and yet still eats, implying this father is either incredibly stupid to confuse a human foot with a hare's, the explanation given by his wife, or knowingly feasts on his son.

In the Grimms' version, the bird is transformed back into a boy at the end. In neither the Scottish nor English counterparts does the bird ever regain human form. But I personally like the idea that there can be redemption and hope, despite the fact that things will never be the same again-it's more comforting in its realism. We all suffer loss and disappointment, and in life not everything is restored just the way it was, but it can be transformed into something new and beautiful.
Posted by Kristin at 11:44 PM