In my previous readings on the history of Sleeping Beauty, I had come across references to the story Le Roman de Perceforest from around 1500. Granted, it hadn't been extensive research, but most of the sources said something about how it contained a girl getting raped while unconscious but was otherwise not that connected to the story we know today.

Books and online sources said as much, if they even mentioned Perceforest as being part of Sleeping Beauty's history at all. I even said the same in my own posts (I keep feeling like I should really go back and edit my archives, since I would now say a lot of things differently and/or have found more accurate information, and I hate misleading people who find old posts of mine through google searches. But I sometimes feel like I hardly have the time to keep up with other fairy tale blogs and occasionally pump out a post of my own, much less take on something like that).

Anyway, it was Surlalune's Sleeping Beauties: Sleeping Beauty and Snow White Tales From Around the World that clued me in to the fact that there's more to Perceforest than just unconscious rape.

The story goes: At Zellandine's birth, three goddesses were invited, Lucina, Themis, and Venus. Themis was upset that the knife she was given to eat with was not as fine as the ones provided for the other goddesses, so after Lucina promised health and a good reputation to the baby, Themis curses the child so that the first time she touches a piece of flax, it would stab her finger and put her into a sleep from which she would not waken. It is Venus who determines she will use her powers to save Zellanidine's life (after Cupid and Psyche, it's weird to me that Venus should ever be on the side of the beautiful young woman). Later, "it is told how Zephyr, in the form of a bird, offers Troylus [Zellandine's lover] transport to the tower in which the beautiful Zellandine is in an enchanted sleep...the knight accepts, and by this vehicle that once carried Psyche to the palace of love he arrives without use of a ladder in the beautiful Zellandine's chamber. He sees at one side a richly adorned bed, grand enough for a queen, the canopy and the curtains were whiter than snow. He hesitates to approach for a long time, like the true friend who is valiant in his thoughts but cowardly in his deeds. [Heidi Anne Heiner notes that this translation leaves out the face that Zellandine is sleeping in the nude] He then tries to awaken the young girl, but is finally conquered by the maiden's charms for she slept like a beautiful goddess, as tender and red as a rose with her white flesh like a lily. He speaks a long discourse begging forgiveness for his grand liberties, and sorrowfully, he decided to follow the tenets of Venus...[which I guess means sex...] 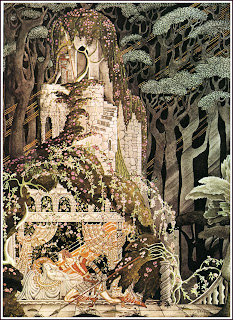 "...Nine months later, Zellandine, who is still asleep, brings into the world a very fine son." The son sucks the flax out in an attempt to nurse, and Zellandine wakes up.

Though this story was written down in the late 1400s, it was probably composed early in the 14th century. This story, which bears much resemblance to Basile's Sun, Moon, and Talia, is not the only example of medieval sleeping beauties either-you can read more about the predecessors in Heiner's/Surlalune's book. She notes that it's difficult to find English translations of these earlier tales. It's funny, I take it for granted that you can find anything on the internet now, but there is plenty of work yet for scholars to do...
Posted by Kristin at 10:40 AM