A Hansel and Gretel Christmas

Found these two ads in the Chicago Tribune a couple days ago and thought you might find them interesting too: 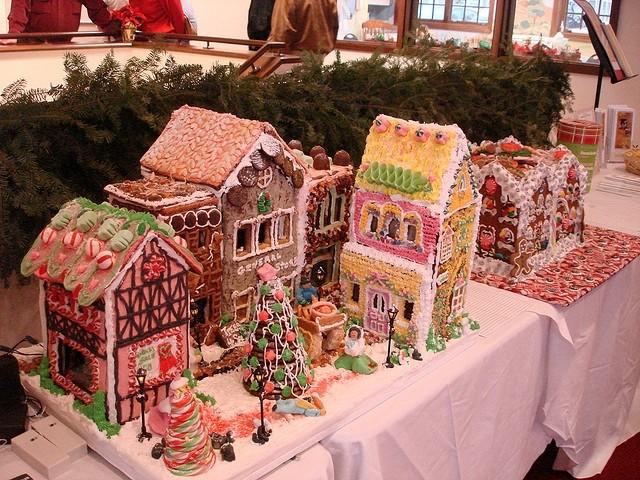 "Gingerbread House Competition: Hansel and Gretel's witch could look to Geneva for inspiration this season as candy-coated houses fill the All Chocolate Kitchen. The houses must be made entirely of edible materials and will be judged...on overall appearance, creativity, difficulty, and precision."

Emerald City's "Hansel and Gretel: A Wickedly Delicious Musical Treat"
Among the most fertile of fairy tales, this classic takes on a new flavor when kiddie ace Justin Roberts teams up with Emerald City's Ernie Dolan. The pair deliver an all-ages rock musical (featuring The Grimm Brothers Band) about the brother-sister duo who discover appearances aren't always as sweet as they seem.

Sounds interesting, definitely a new take on Hansel and Gretel! More info on the Broadway in Chicago site.

Then, also from the Chicago Tribune, but on a much more sober note: They've been doing several exposees on the system of institutions in Illinois for abused and neglected children, finding that they are rife with sexual and physical abuse, from the other residents as well as the staff. Truly heartbreaking to read story after story of kids and teens who were taken advantage of when they should have been protected. (Read more here, here, and here.)

But it did remind me of fairy tales, so many of which are about the abuse of children. And while we sit around contemplating the possible symbolic and psychological meanings of these tales in which mothers, stepmothers, siblings, and lusty fathers are cruel and mistreat the protagonists (I was just reading the other day about how "Donkeyskin" is supposed to be a way that girls live out their Oedipal complexes), we forget that for thousands of kids worldwide, these accounts of horrible abuse are true in the most literal sense. Even in our modern world, the very system that is supposed to put an end to this is making it worse. Many of these girls escape the system, to end up on the streets and in prostitution. They are truly victims, yet I hope no one would accuse them of being passive and unfeminist; they were placed in a horrible, awful sitation they should never have been in. I just hope that these articles inspire some major change, because awareness is only the first step-people have to take action next.
Posted by Kristin at 9:00 AM