Modern people may be surprised to find how fervently fairy lore was believed up until relatively recently. Even this year, supposedly a builder lost 15,000 pounds because locals wouldn't let him disturb a rock under which fairies lived (read here).


But the most awful, heartbreaking results of fairy beliefs are those having to do with changelings. A changeling is a fairy or stock (wooden figure) made to exactly resemble a human and left in their place, while the real human is abducted and taken to the land of fairies. Fairies most often take children, either to raise or to make work as slaves, or young women to be servants, midwives, or wives. Many people never return to the land of humans, although some stories relate successful rescues of the fairy captives.


Some remedies for changelings are harmless and humorous, such as cooking food in an eggshell. This will cause the changeling to burst out laughing, and (if the changeling was in the form of a baby), betray what he/she really is because it takes intelligence to find it humorous. Other remedies include leaving the changeling out, or holding them on a shovel over a fire. Ostensibly, the fairies will not want one of their kind to suffer, and will replace the changeling with the original. 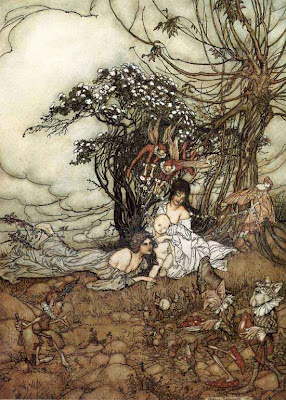 
In Carole G. Silver's Strange and Secret Peoples, she has a whole chapter devoted to changelings. She cites a sickeningly long list of crimes related to claims that the victim was believed to be a changeling.


1826- Anne Rocke killed four-year-old Michael Leahy, who could not walk, stand, or speak, by bathing him three times in icy waters. The boy drowned.


1843-John Trevelyan of Penzance placed son on tree for several hours at Christmastime. Later ordered servants to beat, kick, and starve him.


May 19, 1884-Ellen Cushion and Anastasia Rourke arrested for placing three year old Philip Dillon on a hot shovel. He had no limbs, was suspected to be a changeling, and severely burned.


1895-Bridget Cleary tortured and killed by her husband, neighbors, and six family members


Not only is this shocking to anyone, but as a special educator this strikes a special chord with me. Those who were suspected of being changelings had some kind of physical deformity or mental disability that would lead people to suspect that they must be of another species. Scientists speculate the types of disabilities we now know of that coincided to "signs" of changelings, including spina bifida, cystic fibrosis, cerebral palsy, William's syndrome, Hurler's syndrome, and Hunter's syndrome. Some of my students have the above disabilities. One wonders if the criminals listed above were really glad of an excuse to get rid of their charges, or if they truly believed they were doing what was best for their loved one. It's frightening to think that these cases are only the recorded ones-how many more people were tortured or killed, unbeknownst to us?
Posted by Kristin at 5:37 PM