Indian mythology is intertwined with Hindu beliefs. Indian epic poems "are some of the oldest epic poetry ever created and some works form the basis of Hindu scripture" (from wikipedia), unlike Western fairy tales, which existed before the spread of Christianity, and when Christianity came, some tellers of tales infused the newer Christian theology into the older fairy tales.

Although, apparantly the Hindu tales were also revised a bit for the sake of religion. In a 1928 book from my library, Washburn Hopkins retells some of these ancient stories. He says, "I have endeavored to tell the tale as I conceive it to have been before it was tampered with, to remove the priestly interpretation and re-interpret the story as it should have descended to us, with the emotional implications (suppressed by the priests) intact." I am not familiar with the other versions of these stories (or if modern scholars agree with Hopkins' claims), but the ones Hopkins tells are retold beautifully. Here I am going to relate excerpts of his tale "Ganges" (also known as Ganga).

"There lived of yore a maid divine, a daughter of the sky,
And all the gods rejoiced in her whenever she passed by.
Like shining water leamed her form, her laugh was like a rill,
She was so happy in her heart she never could be still.
Now sorrow she had never known, and ne'er had heard of woe;
So joyous in the clouds she lived she seldom glanced below;
She had no time for other things, but all her life was play.
She had the clouds to toss about, to sing and greet the day,
And chase the little wandering starts that always got away."

One day Ganges comes to the door of heaven, from where she can look down and see earth. But when she does she is stricken to see the sufferings of the people down below.
"As Ganges looked, the joyousness slow faded from her face,
The dancing light that loved her eyes fled to another place,
And for the first time in her life she felt no longer glad;
She became sorrowful; Ganges was sad." 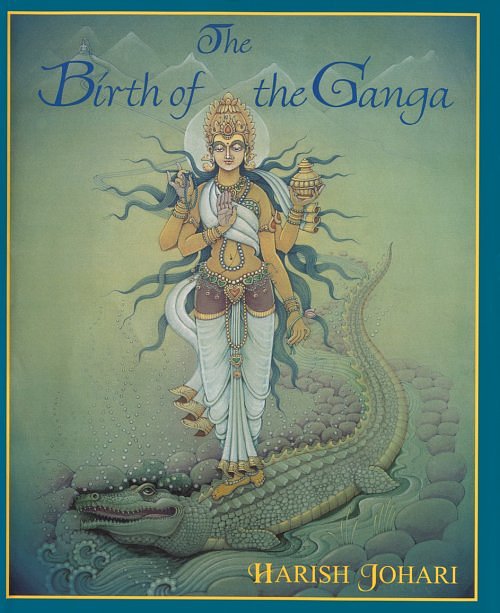 The other gods find Ganges and attempt to distract her.

"Turn thy face from earth, dear, turn thy head and smile.
We from thee have hid the truth but ah, so short a while!
Life is linked with suffering. The truth at last we own,
Which all the gods concealed from thee. We would not make it known"

The gods go on to explain that the earth is in draught and they cannot do anything to help, because Fate has ruled that until a god leaves heaven and gives up their life for the sake of man, the ocean will continue to dry. None of them could imagine giving their lives for the humans, but after considering the matter, Ganges decided she would be the one to make the sacrifice.

The Ganges River in India

Ganges, fair Ganges, stood at heaven's high door.
She looked around on all the scenes she was to see no more;
But in her face no sadness showed, her sorrow was at rest,
She felt a wonder of great joy that flooded all her breast.
She gazed upon the earth below, into the distance deep,
There was no fear within her heart to take that deadly leap;
But she loosed her flowing garment and she clasped her hands on high,
And straight before the tearful gods sprang headlong from the sky.

"Thus she leaped, the immortal goddess, thus she left her home above;
Leaped to earth to show to mortals how a heart divine may love.
Touch we e'en her garment, lo! our souls are purified,
And all sins shall be forgiven him that bathes in Ganges' tide."