Star Wars, Fairy Tales, and Whether or Not Endings Should be Happy 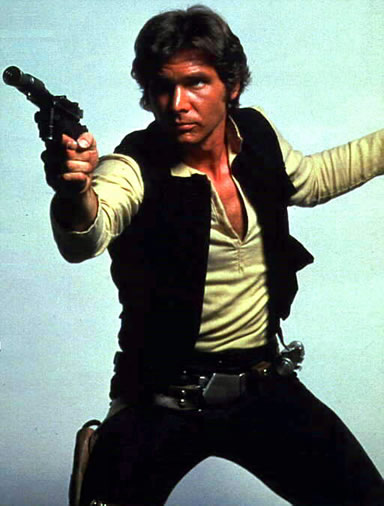 The Chicago Tribune had an interesting article today, Star Wars' Producer Strikes Back, in which Gary Kurtz, producer for Episodes IV and V, looks back on why he left the movies before Return of the Jedi and the differences he had with George Lucas. But they had very different ideas as to how the trilogy should end. It appears that originally, the outline had the story end rather bleak. First, Hans Solo would die, then Leia would be trying to cope with her duties as Queen as the Rebellion is crumbling, and the last scene would be Luke walking alone into the distance.
I'm so familiar with this Star Wars trilogy-and so used to comparing it favorably against the more recent trilogy-it's hard to imagine it another way, especially so comparatively depressing. Kurtz seemed to blame George's desire to make money off of toys for changing the plot to the idealistic, happy ending, although I bet Hans Solo toy sales wouldn't be hindered if he died at the end of the third movie...at least, not initially. I wonder if the movies would have ever become so popular if they had ended differently? Would we return to watch and rewatch a movie that ends ambiguously and with lots of tension? Casablanca is considered a classic for its non-traditional ending, but it takes a lot for a disappointing ending to still be appreciated, especially by the masses. At least Star Wars had the popularity of the first two movies to maybe support a third that might have been a flop on its own.

This reminded me of fairy tales because of the attitude that exists today that since the REAL fairy tales were gory and violent compared to the versions we know today, that our family-friendly versions are wrong and watered down. I read yet another blog post today that cited Disney as the giver of watered-down, prettified, idealistic versions of fairy tales. I've mentioned the Disney issue before, noteably in the post Disney haters: Happy endings, so I won't repeat my arguments (but I will summarize: blame the Victorians for beginning the trends of making fairy tales for children, and Disney movies actually have pretty scary parts in them for kids, though Walt openly wanted happy stories and saw nothing wrong with altering his movies from their sources). But a lot of other children's books and movies (hello, Barbie fairy tales?) make the fairy tales even more child appropriate, as opposed to Disney, which at least in the early days, tried to make family-oriented movies, which is different than child-oriented movies.
But really, though I also spread the message that historical fairy tales are NOT just for children and have lots of adult material in them, it's not like all the oral versions were pure rape and murder and incest, either. Some of them are more mild and wouldn't need too much adaptation to be made into a Disney movie, or even Barbie. Many fairy tales didn't end happily, but many of them did. And while it can be very refreshing to have a story that treats the characters and situations realistically, where not everything turns out perfectly, I'll be the first to admit that sometimes I just want to read a simple, happy story where I know everything turns out wonderfully. Stories are always escapism to some degree, and sometimes we want more escape than others. Since we really don't have any authoritative versions of fairy tales, we really can't say that one more violent version of a fairy tale is more authentic than another (well, some can be classified as less authentic, but there's no accurate measuring rod to rate everything up against). I really love having multiple versions to choose from-stories for adults, stories for teens, stories for families. I love dark fairy tale treatments, but I don't think it's neccessarily a negative thing to have "light" fairy tale treatments either.
What do people think about Star Wars, though? Would you like it more or less if it ended Gary Kurtz' way? Would it have become as much as a classic? From a documentary I watched, they were saying that the overal mood in America in the '70s was very depressed and disillusioned and other entertainment was more gritty, which is why the triumphant victory of good over evil was so needed and well-received at the time. They also said a lot of the themes were reminiscent of old myths, linking it to the universal human desires for the battle of good to conquer over evil. But this documentary probably wasn't especially objective, either, and I wasn't around in the 70s to know what it was like.
Posted by Kristin at 10:09 PM