The people of the Bolinge parish were suffering from famine. All the cows had seemed to run dry, but for the rich, elderly Lady Skinflint and her ugly daughter. Though the old lady and her daughter only had four cows, they had hundreds of cheeses and tubs of butter to sell. The people didn't understand how theirs could be the only house which produced milk, but there was nothing they could do.

Finally, when Star, the wife Jonson's cow stopped giving milk, her eldest son Jerker decided to do something about it. As he went to bed, he left his candle burning, knowing that the tomte, or goblin, would come by to blow it out. When the tomte came, Jerker jumped up and bowed to him, and asked the tomte if he had moved out, since the blessings seemed to have left their house and gone to Lady Skinflint in the manor. The tomte would only tell him that, if he could look into Lady Skinflint's storeroom, there he would find the answers.

So the next morning, Jerker awoke at dawn, and traded his nice Sunday clothes for some rye cakes with butter, and sausages. He went on to the manor and offered his services as a farmhand, giving some of his food to the current farmhand in order to convince him to pretend to be sick, so they would hire him.

Jerker tried to get a glimpse into the storeroom, but it was kept locked. The ugly daughter would hand him cheeses from the storeroom to bring to the larder, but he could not see inside the storeroom. He managed to pretend to hurt himself and steady himself on the door, but secretly stuck a stick inside the lock and broke it off. With the lock broken, the lady and her daughter stood guard in front of the door.

In the evening, Jerker pretended to fall asleep, but then snuck down and waited outside the storeroom until the lady and her daughter came. He watched as the old woman fished in her pocket and brought out a big barrel stopper, or bung, and wedged it in a hole in the wall. The old woman sat down on a milking stool, placing a pail just under the bung, and patted the bung, saying, "Come, Boss. Come, Brindle Bell. Come, all you cows."
"Which one will you milk first today?" asked her daughter.
"I think I'll have the parish clerk's Bean. Come Bean, come Bean," she called.

As Jerker watched a large cow's udder appeared under the bung on the wall. The woman gripped it and sang:
"Cow of gold,
cow of gold,
give as much milk
as the pail will hold."

Milk came from the cow's udder and filled the pail. The old woman did the same to the sheriff's cow, but when she suggested Mother Johnson's cow Star, Jerker decided to put a stop to it.He called,
"Cow of gold,
cow of gold,
knock the hag out,
knock her cold." 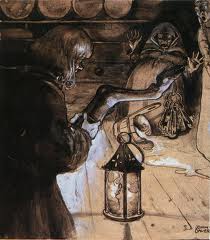 Instead of an udder, a cow's leg shot forth from the bung and kicked the hag. Jerker continued to sing the song, and as he did, the cow's leg continued to kick the mother and her daughter. The old lady was angry, but eventually pleaded with Jerker, promising to do anything in order to get him to stop. He told her to bring him all the gold she and her daughter had earned by milking the cows of the village, and he also took the bung.

Jerker woke the manservant, and together they carried the bag of gold back to the village, which they distributed equally to all the villagers. The people were grateful and decided to all give Jerker 10% of their share. Jerker was able to buy a farm and marry the girl he liked. Lady Skinflint and her daughter became poor. The bung he destroyed in a fire so that it would never harm anyone again.

*Story by Anna Wahlenberg, illustration by John Bauer. By the way, interesting article on John Bauer here, that compares him to contemporary fairy tale artists
Posted by Kristin at 6:27 PM