We've all come to know the Perrault version as the classic Cinderella, especially through the Disney movie based on Perrault's tale. But as Pat Schaefer reminds us in "The Contribution of Marian Roalfe Cox," from Cox's 1893 collection of Cinderella tales, many of the "standard" details we think of as making up the story of Cinderella aren't really the most prominent in the history of the story. In the words of Stith Thompson (1946): "The version of Perrault is so familiar through two hundred and fifty years' use as a nursery tale that we are likely to think that all the details he mentions are essential. Some of them, as a matter of fact, are practically unknown elsewhere." Using Schaefer's gleaning of Cox's text, we can see how non-essential some of the details really are: 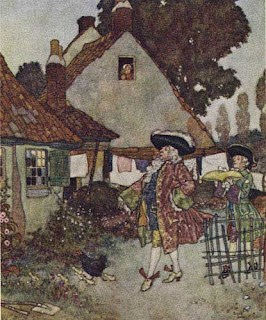 Glass slippers-in Cox's study of 345 variants of the Cinderella tale, only six of them involve glass slippers. The identification of the heroine through footwear is prominent, however, but the shoes are most often made of other precious metals-silver, pearls, silk, diamonds-but sometimes more simple shoes, such as clogs and boots. Other Cinderellas were identified not through shoes at all, but through other objects-jewelry or a glove

The ball-Cinderellas are discovered at some sort of gathering, but most often at church and not a ball. Cinderellas may also attend festivals, the theatre, the races, the dancing-green, or simply go to town. 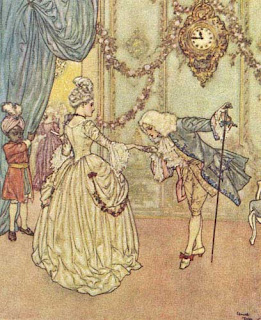 Midnight-Cinderella is rarely given such a specific stipulation, and the spell doesn't actually "end," she is simply warned to return before the others. 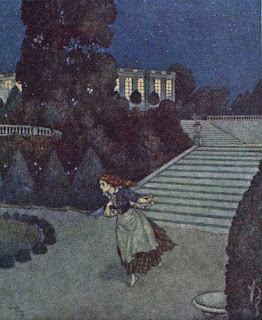 Fairy godmother-This element also is rare, as most Cinderellas are aided by animals, supernatural beings, or inanimate objects. Animals usually represent the spirit of a dead mother or father, and may be any thing from dogs to fish, ermine to eel. Cinderella may also be helped by a tree (such as in the Grimm version), or even in one tale, by a magic sword. 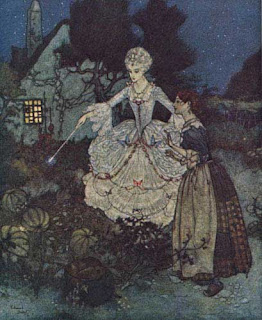 Edit: This article, shared by Heidi of Surlalune, has a quote I really like which very much relates to this post: "There is no one authoritative tale of Cinderella, only a hall of mirrors with a different face in each reflection." In the article Marie Rutkoski discusses various versions of Cinderella, especially how the older ones connect Cinderella so closely to nature-animals and plants end up being the driving force in the action in the story. Click through for a fairly brief but interesting read!
Posted by Kristin at 12:35 PM