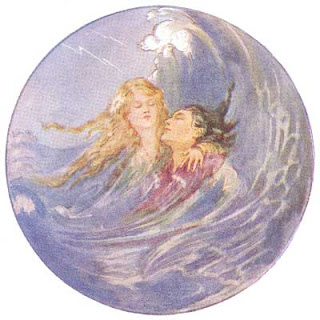 In one sense this is true-when men such as the brothers Grimm collected fairy tales, they tended not to include stories which existed in folklore that featured strong, clever female heroines, and instead gravitated (however consciously is debatable) towards stories with active males and passive females. Not only that, but as Marina Warner cites from Ruth Bottigheimer's analysis of speech patterns in the Grimms, as the Grimms published their later editions, the female heroines used less and less words and the female villains spoke more. Thus girls tend to subconsciously receive the message that to be good and desirable like the female heroines in the stories, they must be quiet. 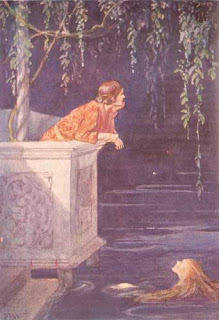 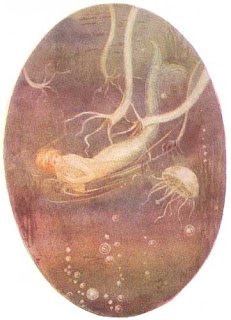 There are two famous examples of females who aren't simply reserved, but are completely unable to speak-Hans Christian Andersen's Little Mermaid, and the sister from The Wild Swans and its variants.

The Little Mermaid stands in direct contrast to the sea maidens of antiquity, the sirens. Sirens used their voices, beautiful and alluring, to draw men to them and cause their death. Their voices are therefore powerful, and evil. The Little Mermaid gives up her voice willingly for the chance to win the love of a prince and her immortal soul. Now the desire is hers, but it is she who is forsaken. 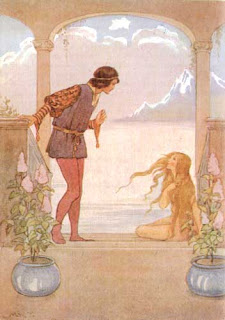 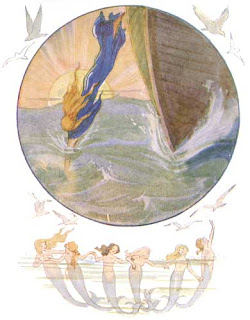 The Disney version makes Ariel, in Warner's words, "a fairytale heroine of our time." She knows what she wants (another word count fun fact-the word "want" is spoken by Ariel more than any other verb) and will go through anything to get it, but this time hers is a happy ending. But in this version, according to Warner, "female eloquence, the siren's song, is not presented as fatal any longer, unless it rises in the wrong place and is aimed at the wrong target." The female voice is now powerful like the siren's, but not inherantly evil.

The sister in the Wild Swans is silent by choice-if she speaks one word before the shirts of nettles are made and placed on her enchanted brothers, they will stay swans forever. In one sense, this can be seen as yet another example of encouraging women to be quiet and submissive, but I always return to this: though she is rewarded for enduring, the silence is clearly meant as a hardship-the happy ending includes a return of her voice. (In a way, the heroine from Goose Girl is also silenced, because she gave her word not to tell the truth of her situation to a living being-but the characters are able to find a clever way for her to reveal the truth anyway). 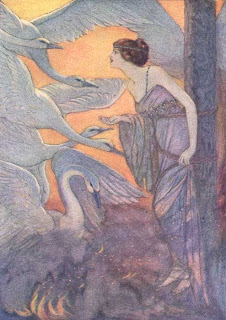 Not only that, but silence should not always be interpreted as a bad thing. Don't get me wrong; I don't support the suppressing of voices of any gender. But this is Warner's personal memories of reading the Wild Swans, one of her favorite childhood stories: "it still seemed to me to tell a story of female heroism, generosity, staunchness; I had no brothers, but I fantasized, at night, as I waited to go to sleep, that I had, perhaps even as many tall and handsome youths as the girl in the story, and that I would do something magnificent for them that would make them realize I was one of them, as it were, their equal in courage and determination and grace" (emphasis mine). The actions of the sister are indeed impressive-there are different forms of heroism, not all that are as easy to recognize-but those that are quieter are often the most noble.

Fortunately, we are not as contrained by the severe gender expectations of the Victorian times, but that doesn't mean these stories or even these particular versions have to be thrown out and completely replaced with new "girl power" versions. There are times when we all feel silenced-we don't feel like our opinions are being taken seriously at work, we feel overlooked in a certain relationship-it can be encouraging to read that there will come a time when we will be able to speak again and the truth will be revealed.

Illustrations of Little Mermaid by Margaret Tarrant, Six Swans by Elenore Abbott
Information from Marina Warner's From the Beast to the Blonde: On Fairy Tales and their Tellers
Posted by Kristin at 1:49 PM