The Seal Maiden: A Tale of the Hebrides


"The King of the Sea had a beautiful Queen, and they loved each other dearly. They had delight in many children, who were all straight-limbed, brown-eyed, eager-hearted, and their happiness was greater than any tongue can tell.

Suddenly dark sorrow fell upon this King. His wife tarried too long on the level white sands; a great storm arose before she could reach safety in the pearl palaces of the sea, and she was trampled to death by the wild sea-horses as they rushed and bounded over the grey granite ledges of the isles.

Lonely in his soul and grieving for his children, the King sought the cave of the sea-witch. Thinking she would care for his children, he married her, but when she saw their surpassing loveliness green envy and black hatred surged within her. One night when the moon was hidden behind dark massy clouds, and the sea moaned with its swelling pain, she distilled a magic from the yellow berries of deadly sea-grape that grew on its pale green sickly stem around the entrance of the cave.

This magic enchanted the children of the sea, so that they became seals. But each year for one day and one night, from sun-down to sun-down, they could take and enjoy their own shapes again.

So it chanced that a young fisher-lad toiling in the early dawn saw a sweet maid playing in the white foam, and loved her. All that day long they roamed together among the moon-flowers, hearing the music of the murmuring tide. When evening came they watched the rising moon cast its silver pathway over the lulling sea. Then a little sobbing wind began to creep over the surface of the deep. The maiden grew strange and shy, and presently she slipped away among the black shadows of the great grey rocks on the shimmering sands. Puzzled and angry, the fisher sought for her, but found only at last a lonely seal, whose eyes were brown and kind and loving. They say that madness came upon him. Madle he sailed away in the teeth of a lowering storm. His frail boat was dashed to pieces on the cruel rocks over the cave of the sea-witch, where grow the deadly yellow berries of the sea-grape on its pale sickly stem." 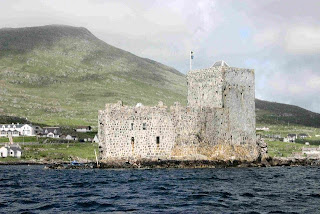