Via Megan of The Dark Forest, I just found this New York Times article: Reaching My Autistic Son Through Disney. Though it may sound like blatant Disney promotion, it struck a more personal chord with me.

The article tells of the Suskind family, one of many affected by autism. At age 3, their son Owen regressed into a nonverbal state and was largely unresponsive. One of his passions remained watching, and rewatching, and rewinding and watching again and again, classic Disney movies. You'll have to read the full article for the whole story, which is really stunning, but because of Owen's connection to Disney movies, he was able to gradually connect to the world around him again. His family took to communicating with him in Disney quotes and through Disney character voices and it was the only thing he would respond to at first. Now he is flourishing in the world around him, although his attachment to Disney remains.

I've made mention of my jobs through the years, which are always slightly complicated to explain and the simplest thing is to call myself a music educator/special educator, although I have done little teaching in schools aside from my student teaching and the occasional subbing. But for the past 9 years I have been helping in my former church's disability ministry-I went from volunteering to holding a part time job and now I'm back to volunteering. I did various things from running weekend events to working in a group home, but my main passion there has always been teaching music classes.

So many of the stories in the article reminded me of my own students and friends. Through the years I remember acting out Princess scenes with my friend Christy while babysitting her; she would tell me, "okay, you Beast, I Belle" and we would quote her favorite scenes from Beauty and the Beast (the West Wing scene was the favorite, but so was the library). Another student, Tim, who also has Down Syndrome, is really into Disney as well. He and I have a game we play where we'll quote Disney lines and songs to each other, and we have to guess which movie it's from. Just this weekend he was asking me where my Disneyland book was (I brought it to class for a Disney-themed summer music camp I did last summer) and when he could look at it again :). So many of my students with autism and Down Syndrome love Disney. It's familiar to most of them and a way they can connect with other people, and the vast merchandising available for Disney products certainly helps, but is that the only reason people with disabilities have a passion for the Mouse? From the article:


"Owen’s chosen affinity clearly opened a window to myth, fable and legend that Disney lifted and retooled, just as the Grimm Brothers did, from a vast repository of folklore. Countless cultures have told versions of “Beauty and the Beast,” which dates back 2,000 years to the Latin “Cupid and Psyche” and certainly beyond that. These are stories human beings have always told themselves to make their way in the world.
But what draws kids like Owen to these movies is something even more elemental. Walt Disney told his early animators that the characters and the scenes should be so vivid and clear that they could be understood with the sound turned off. Inadvertently, this creates a dream portal for those who struggle with auditory processing, especially, in recent decades, when the films can be rewound and replayed many times."

This is not the first time I've heard someone else make a connection between Disney and people with disabilities, either. I posted back in 2010 about David Koenig's book Mouse Tales: a Behind the Scenes look at Disneyland. From that post (and it's not a Disney endorsed and published book, by the way):
" Koenig lists two incidents which have to do with children with autism-one boy was there who had never spoken in his life. Mickey Mouse was being mobbed, and the autistic boy broke away from his father, rushed over, and said "Mickey Mouse"- his first words. The second incident I'm a little skeptical of-it sounds like a boy with autism "snapped out of it," meaning, I assume, his autism in its entirety, after repeated trips to Disneyland, because "he realized it was better living in Disneyland than in his head." "

I also attended a workshop at a disability conference once entitled "How to use Disney movies to help your child speak." The premise was similar to that of the article-since Disney movies are so popular among the population of people with disabilities, we can use them as education tools to help motivate and engage children. People with autism struggle with social interactions-they often connect with objects, toys, and/or movies better than they do with other people. By entering into their world, we can often communicate better with them.
The original article quoted cited several instances where people with autism felt personally connected to Disney characters-one young man felt like Pinocchio, because he felt like he was made of wood and wanted to feel things like a real boy; Owen himself identified himself as a sidekick, someone there to help the hero fulfill his destiny, scrawling "no sidekick left behind" on paper as he was held back in school, watching his classmates succeed.
Disney movies are not the most popular among fairy tale fanatics. Yet it's important to realize, though they may not be your favorite and you might actively dislike them and disagree with many messages they send, how powerful they can be. Disney and its characters and toys won't be going away any time soon. Parents with fond memories of Disney movies and theme parks are able to share those with their children as together families experience the new hit Disney movies.

So instead of writing off Disney and everything they've produced, maybe we should try to work with it. We can use common ground to help educate people about other fairy tale versions, while being aware of the potential issues associated with their storylines. It's a good reminder to be sensitive too-Disney movies were a core part of many people's childhoods and many of us (myself included!) have strong emotional ties to them. 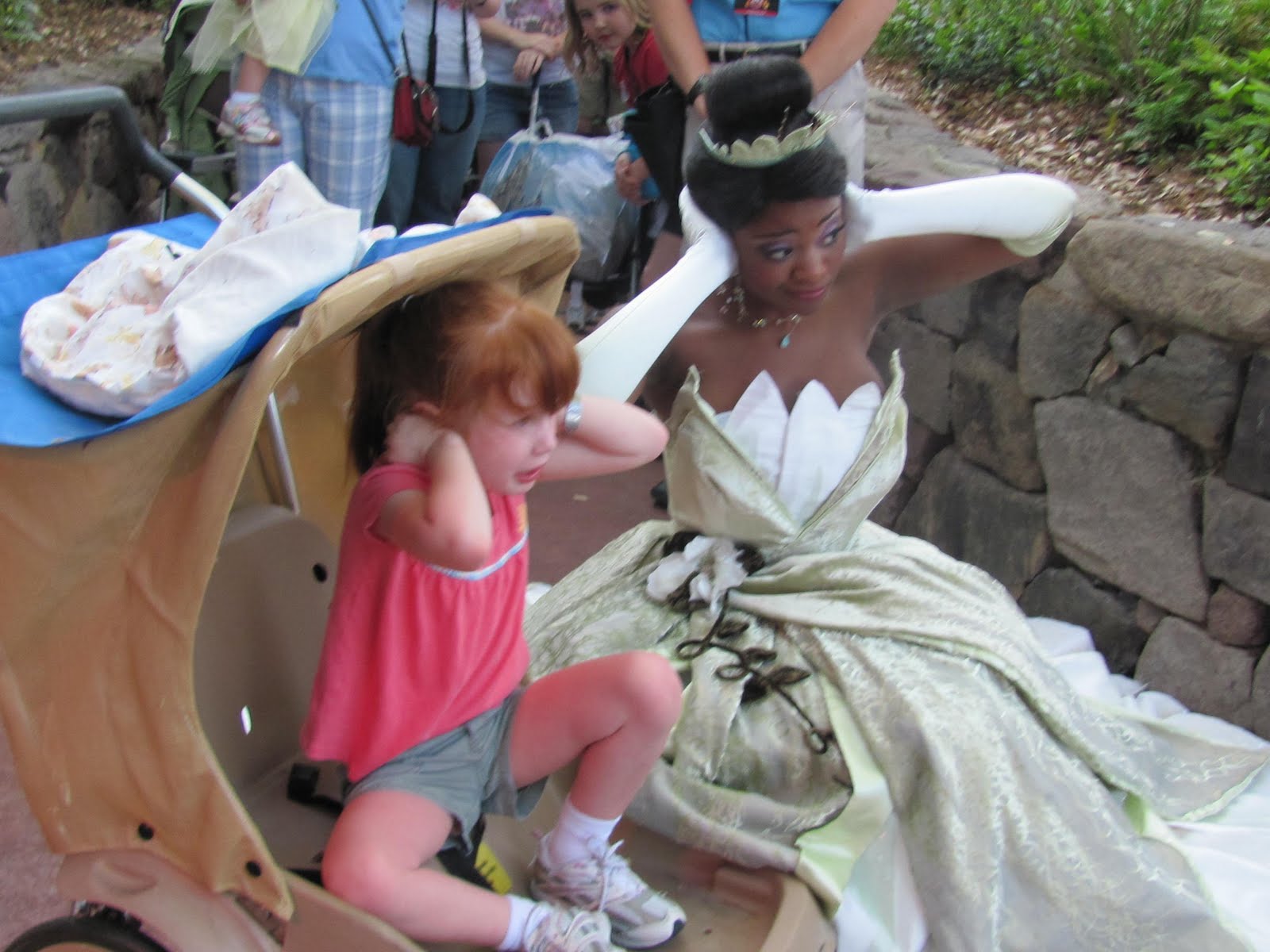 (This image, found here, is pretty precious...a little girl with autism wanted to see Princess Tiana, but nearby fireworks started and she covered her ears, overstimulated. So this Tiana joined her, covering her own ears, and they had a special bonding moment.)
Posted by Kristin at 6:22 PM