Gigi and the Magic Ring: An Italian Fairy Tale

A young man went out from his mother's house to go out into the world. On his way he passed an old woman carrying a heavy jar, and offered to carry it for her. In gratitude, the woman fed him and gave him her dog and cat as companions, and a ring, which she promised would grant him wishes. Gigi didn't think much of the ring itself, and didn't want to rob the poor old woman, but she insisted, so he took the ring and the animals and went on his way.

Later on, Gigi was hungry. He happened to be playing with the ring in his pocket and thinking, "I wish a table could be set before me now, with a fine supper on it," when all of a sudden it appeared. Gigi and his animals ate a full meal, and Gigi thought of all the other things he could wish for-but stopped himself, not wanting to lose his head over his good luck, and fell asleep.

In the morning he thought of wishing for horses, but laughed and decided to continue walking. On his way he passed a home with a beautiful maiden looking out of the upper window. He decided to use his ring to wish for a fine home to be built across from hers. He was able to get to know the maiden, Maliarda, and her parents, and by the end of the first day Gigi and Maliarda were engaged.

However, the eve before the wedding day, Maliarda asked him how his house had sprung up so suddenly, and, being trusting, Gigi told her the truth. Maliarda told her mother, who advised her daughter to slip a sleeping potion into Gigi's drink, and take the ring from his finger. She did this, and put the ring on, and wished that Gigi's palace would be moved to the highest, steepest, snowiest peak of the mountain range.

Gigi woke up cold, and was perplexed as to why he was on the top of a mountain, but knew it didn't matter as long as he had his ring. It was only when he discovered his ring was missing he suspected the beautiful Maliarda to be a traitor.

Gigi's dog and cat made the trek down the mountain to gain his ring back for him. The door to Maliarda's room was closed, with a hole too small for either of them to get through. The cat caught a mouse and promised to release him if he would first gnaw the hole larger. The mouse gnawed until all his teeth were broken, but the hole wasn't large enough for even him to go through. So the mouse's littlest child went in through the small hole, bit Maliarda's finger in her sleep so she took off the ring without waking, and brought it back.

The cat and dog went back to the palace on the mountain, but quarreled along the way as to whose credit it was that they had retrieved the ring. As they quarreled, the ring fell into the river and a fish snapped at it. The dog jumped it and got the ring from the fish's mouth. Gigi assured them that they were both equally loved, and he wished his palace and Maliarda's to switch places. After a few days Gigi felt sorry, and wished them halfway down the mountain, where they could reach safety, but their useless mansion was left at the top.

After a year had passed since Gigi first began his adventure, he returned home, where his mother and sister were amazed at his fortunes. His mother hid the ring away so as to avoid more mischief, and Gigi already had enough money to live on. Gigi meant to return the ring to the old woman if he should ever see her, but she was never seen again. As for Gigi...

"Is the ring still in the wedding-chest? Does Gigi ever take it out, put it on his finger and wish? I do not know. When I have passed his way I have seen him ploughing with a fine team of fat oxen, and singing the while, or in the woods with his good friends the cat and dog, for they are still alive and hearty. He has not yet gone back to live in a palace; but all the neighbors envy his mother and her good son Gigi." 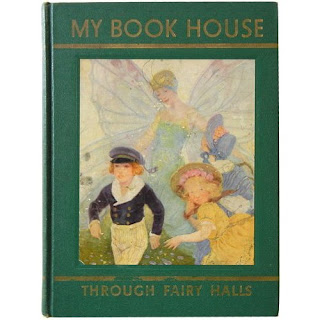 *Story by Anne Macdonell, found in My Bookhouse Through Fairy Halls.
Posted by Kristin at 11:52 PM