Over a year ago I did a post on the history of Little Red Riding Hood, and how the story that began as purely a bawdy, entertaining folktale had become adapted as a children's story that was meant to instruct the younger generation on the proper way to behave, according to Victorian standards.

Since Perrault's and the Grimms' famous versions, many versions continued to be produced that followed the same patterns: Red Riding Hood breaks an admonition her mother gave her, thus making it a story about the dangers of disobeying, and she is rescued by a man. In Jack Zipes' The Trials and Tribulations of Little Red Riding Hood he gives us a glimpse into the next wave of Little Red Riding Hood stories-at the beginning of the twentieth century, writers began to play around with and parody what were by then familiar tales. These stories tend to fit into several categories. 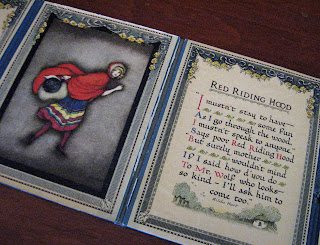 Political statements
Fairy tales were used by those on all sides of the political spectrum. Werner von Bulow wrote a racist essay (published by the Swastika Publishing House, which should give you a clue) using the motif of Little Red Riding Hood as, essentially, Nazi propaganda. But there were others, like Ulrich Link in 1937, who used irony to critique Nazism through the same fairy tale. In his story, Little Red is a member of the League of German Maidens, and when the wolf is killed he is "distributed among the Reich's nutrient producers and made into meat in his own juice." Zipes points out that the traditional way of using the tale to promote conformity (stressing the young girl's need to absolutely obey elders) is exaggerated to critique Nazi conformism.

LRRH was also used to critique fascism (Evgenii Shvarts in 1937) and totalitarianism in H.I. Phillips' version, told "as a Dictator would tell it." In Phillips' story, the narrator portrays Little Red as the aggressor, and thus justifies the wolf's actions, making him the true hero.

Margaret Kassagep's story criticizes how common crime had become in West Germany in her 1980 story, where Red and her friend Wolfi both kill the grandmother to take her money.

Gender equality
James Thurber presented a very different Little Red Riding Hood than the public was used to in his 1939 Little Girl and the Wolf. She is not deceived, or even phased, by the wolf. My favorite line: "she saw that it was not her grandmother but the wolf, for even in a nightcap a wolf does not look any more like your grandmother than the Metro-Goldwyn lion looks like Calvin Coolidge." After that, the little girl calmly takes out a gun and shoots him.

O.F. Gmelin's 1978 tale features a clever girl that cuts her own way out of the wolf's belly. Angela Carter's 1979 story presents a "strong-minded child" that fends for herself and tames the wolf.

Many other versions since then have heroines that are not gullible, and/or fend for themselves without needing the aid of a hunter to come rescue her. Sometimes she is on her own, and other times she and her grandmother conspire together to overthrow the wolf (which, I might add, is what happens at the end of the Grimm version after they got rescued the first time.)

Ecological statements
In some versions, the wolf's animal nature is embraced rather than condemned. Similar to modern interpretations of Beauty and the Beast, the animal characters are seen as representing sexuality, and modern females can embrace their wild side rather than repressing it.

But there are other reasons for this as well. Now that wild animals do not present a danger to our everyday lives we don't really see them as a threat-if anything they are romanticized. They can also represent getting in touch with Nature.

Traditional versions
Of course, the traditional version that emphasizes the importance of not straying from the path is still being circulated in children's books that take out anything that might be considered too violent. The storylines brought to us by Perrault and the Grimms will not entirely disappear for a while yet.

*Illustrations by Jennie Harbour
Posted by Kristin at 4:48 PM