How Disney Parks Affect How We View Fairy Tales

I'm back! The trip was fantastic. Exhausting, as I expected, but totally worth it!

After some days of performance we spent a very anticipated day in Disney World's Magic Kingdom. If you think about it, the experience of Disney Parks-from the rides to the shows and characters-are really just a different way of storytelling. In high school I watched Disney's "Snow White" and realized that, if I had ever seen it before, it was so long ago I barely remembered it. But I thought I had seen it-I was familiar with the characters, music, and basic plot. Such is the effect of riding the ride, seeing the characters march by in parades, looking at the merchandise, etc.-viewers are still familiar with the Disney versions of fairy tales even if they've never seen the movie. The rides are such a short, truncated version of the Disney movies-they remind you of the major scenes of the movie in five minutes or less, keeping that specific version prominent in your mind, especially if visitors to the park aren't regularly reading/watching other versions. The last time I was in Disney World was five years ago so I got to see the new Fantasyland addition for the first time. And as a lifelong Beauty and the Beast fan, it was incredible to see scenes from the movie in life size. We got to eat in the Be Our Guest restaurant, which allows you to dine in either the library (which looked nothing like the library in the movie, didn't even have any books), the West Wing, or the ballroom. We also walked through the hall of armor and got to take pictures by the stained glass window. I was thrilled that my buddy for the week was my very good friend Christy, a 17-year old young woman with Down Syndrome, who was actually the junior bridesmaid in our wedding. Long time readers may remember some of her fairy tale artwork or when I blogged about the experience of watching Disney's Sleeping Beauty with her and her reactions. 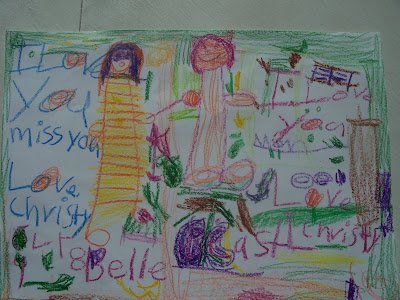 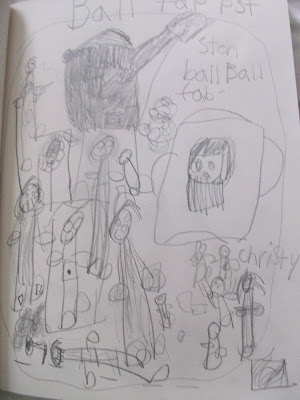 One thing that was new to me this trip was the whole experience of meeting characters. It was never something my family was really into (the picture of me with Belle and the Beast is an exception). They train each actor with knowledge of the movie they are in, having them mention trivia about their character during your visit, so it  really enhances the feeling that they are real characters with a life even beyond their Disney movie.

Meeting the princesses and heroes was fun for the students in our group, but I really enjoyed visiting Gaston. First of all, we weren't actually in the line, his shift was almost over, so we were just watching. But he saw two adorable girls with Down Syndrome, one in a wheelchair, and when he was done with the people in the line, he came over to us and brought our students over to him! In general the cast members at Disney seem to have a soft heart for people with disablities, but a special thank you to Gaston!

Christy asked him why he was so mean to the Beast. Gaston replied that he wasn't mean; he was the nice one (because he had a nice face). He also had this whole theory-which is actually something that fans and critics of the movie have brought up before-that the Beast was really an imposter, because where did he come from? If he was the Prince, where were his parents, i.e. the reigning King and Queen? How is he a Prince if he apparently has no kingdom? He also called the Beast Belle's dog, and twice insulted my shirt, saying it was horrible:

I was wearing this tank top from Hot Topic last year, no longer available

Hearing Gaston's point of view was interesting for me, and really made Christy think. The rest of the day she kept asking questions, "Why did he say he didn't like your shirt? I don't understand" (even after repeated attempts at explanation) and "Why did he call the Beast a dog? Is the Beast a dog?" She struggles a bit with abstract thinking, but that's what's so great about exposing kids to the fact that, while he might be lying, Gaston would have a different point of view than Belle or the Beast. Christy was great though, continued to challenge him, and when Gaston was showing off his muscles she whipped out her own biceps: 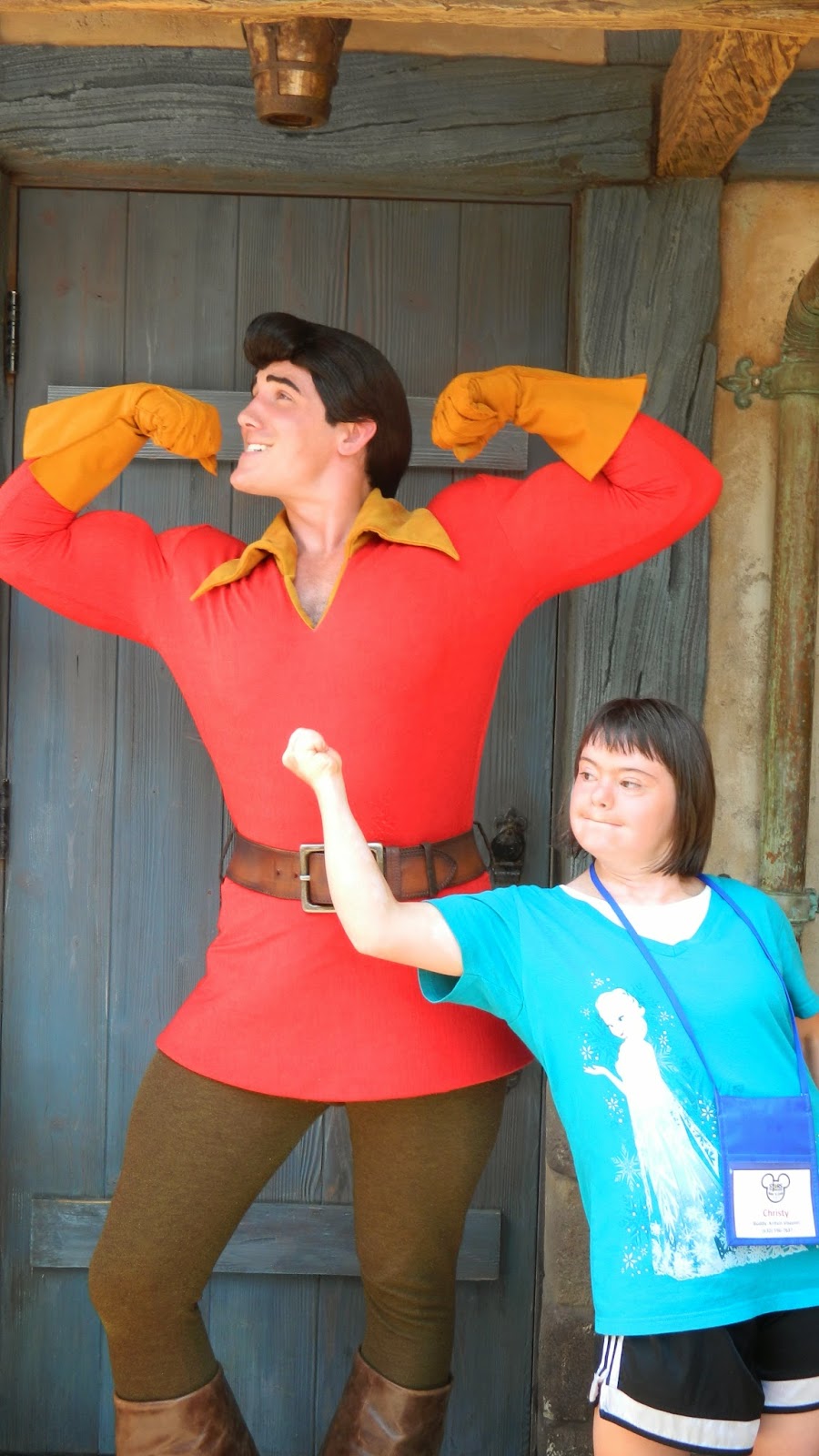 Then, the highlight of the trip: meeting Elsa and Anna. So, Christy has loved Sleeping Beauty for years, but like most other young girls has become OBSESSED with Frozen lately. She knows all the words to all the songs and will tell the plot of the movie, in depth, to anyone who will listen (as well as those who are tired of listening...). So we knew we had to use our fastpasses to skip the three hour line (!!!) to see the characters.

Now I'm pretty sure Christy doesn't think the characters are actually real, she will ask which people do the voices for some of her favorite cartoon characters and she's seen different plays so she's aware of the concept of actors playing parts. But even if she logically knows, partly, the characters aren't the ones from the movie, she takes them very seriously. All day long she was practicing what things to say to Elsa-she was going to tell her she was her favorite Queen because she has powers, she loves snow, and all her favorite parts of the movie. When it was finally her turn, she excitedly greeted them each by name like they were long lost friends, and ran up to Elsa and gave her a hug. It was so precious I was actually crying as I was snapping pictures...

Here is Elsa noticing her own face on Christy's shirt: 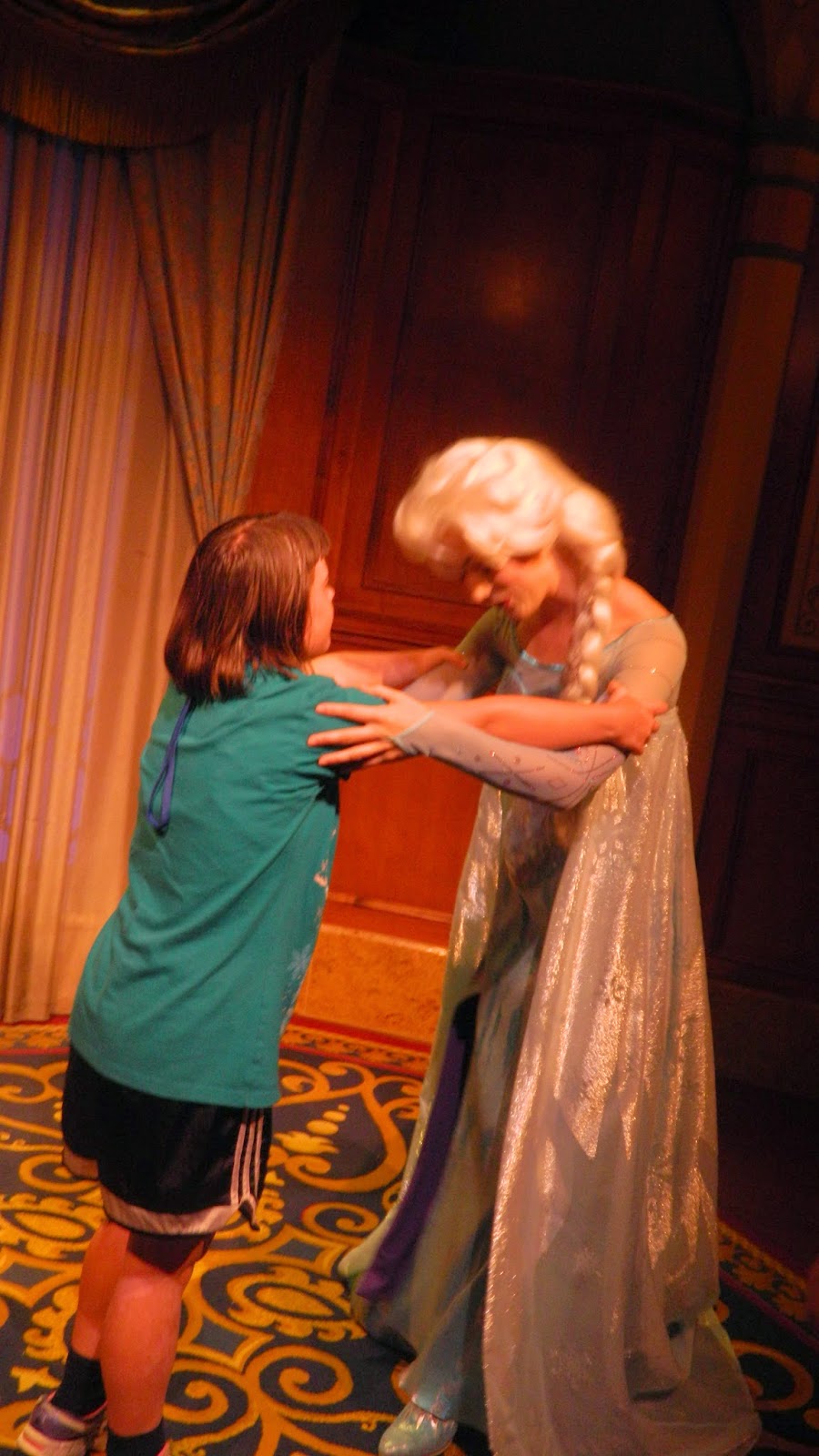 Anna noticed that Christy also happens to have a gray streak of hair, and was very excited, jumped up and down and said, "we're twins!" Christy LOVED it, the rest of the evening when we saw people from our group she would tell them, "Guess WHAT!! We saw Elsa and Anna, and she saw my HAIR!! We're TWINS!!!" 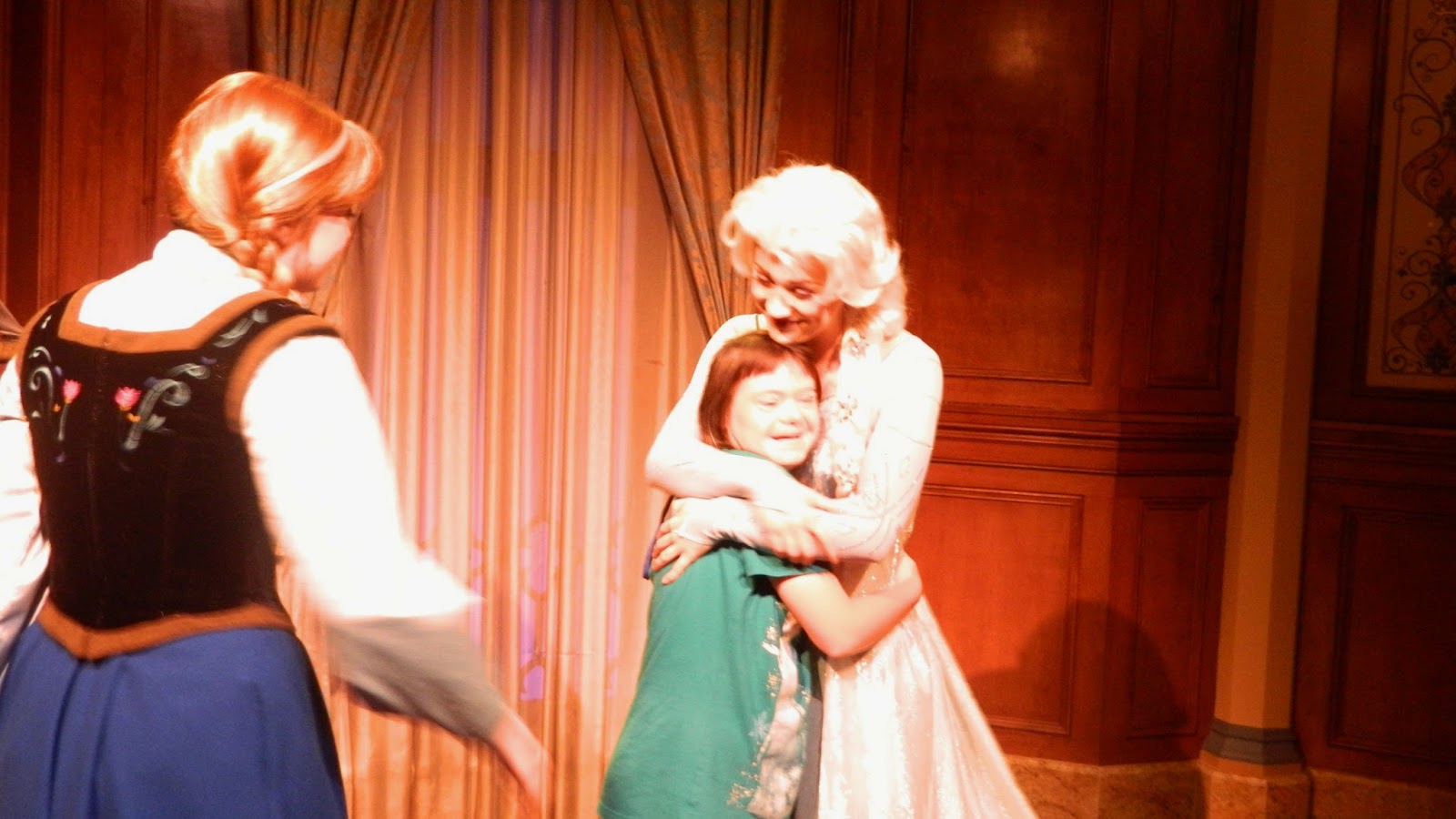 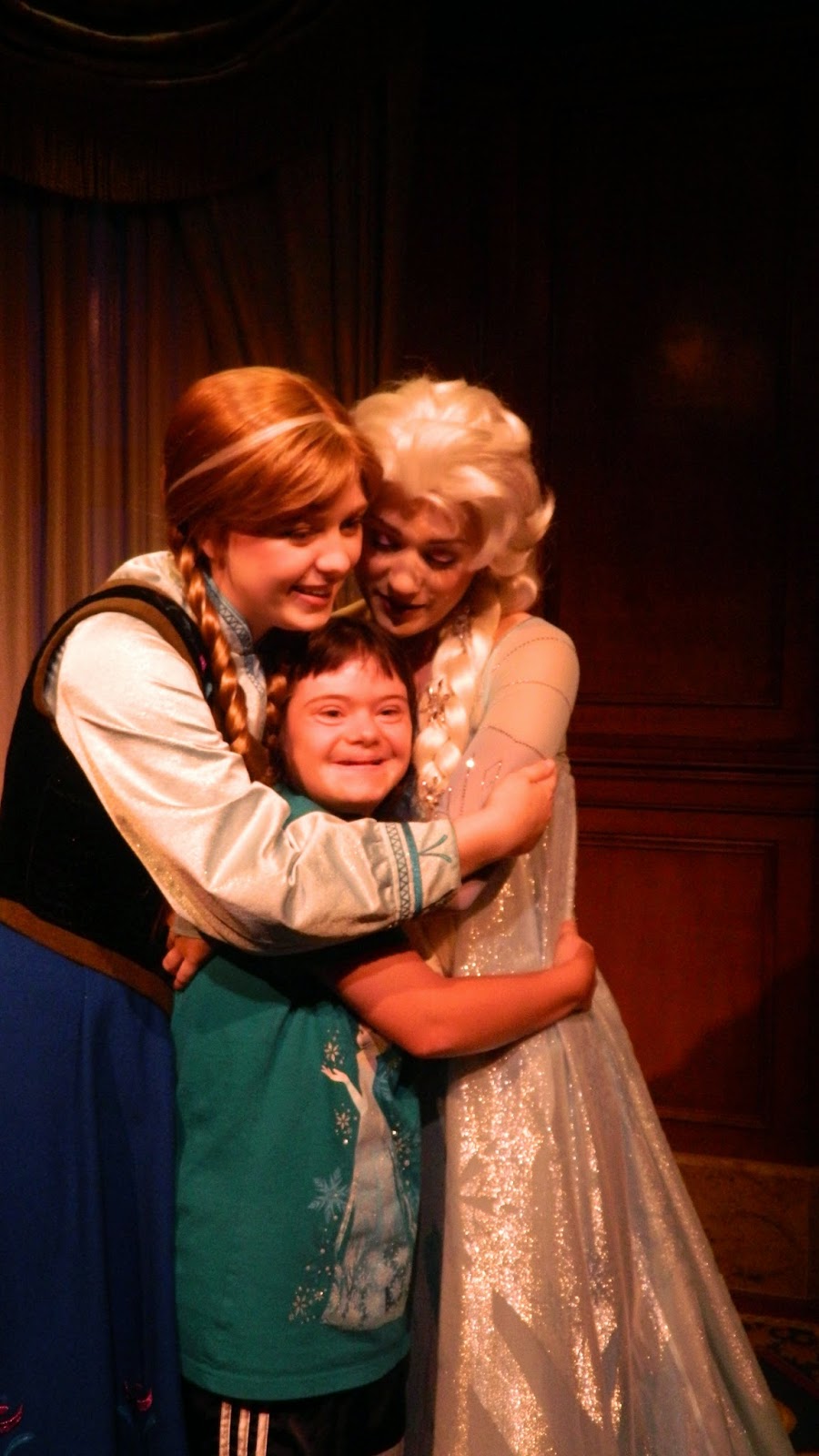 I can only imagine what effect this kind of meeting has on a child afterwards. If they were already fans of the character, now he or she will go home and be even more connected to the movie. Christy now has a personal connection with her heroes, who called her by name and noticed similarities between them. She also got a souvenir Frozen storybook from the gift shop and was showing it to everyone, and the next day poring over it in the airport.

And unfortunately for us, meeting the characters in a believable way makes it even harder for kids to accept that the Disney version of a fairy tale is NOT definitive. I didn't bother trying to tell older versions of the fairy tales on this trip; with this audience of mostly concrete thinkers it would be more confusing than anything else, and I didn't want to ruin their special day. Although another day of the trip we were on a lake that had several swans swimming, and Christy was very excited, saying, "It's Swan Lake!" (she's really into ballet too) and we named all the white swans Odette and the black ones Odile.

I'd love to hear from other people-how have your experiences in the Disney parks affected you/young people of your acquaintance, especially in how you thought of fairy tales?
Posted by Kristin at 10:22 AM