Andersen's "The Little Mermaid" is the most well-known Danish mermaid tale, although that was based on literary French stories. So it's interesting to compare this famous story with other tales that have been recorded around the same time. These are from Surlalune's Mermaid and other Water Spirit Tales From Around the World book. 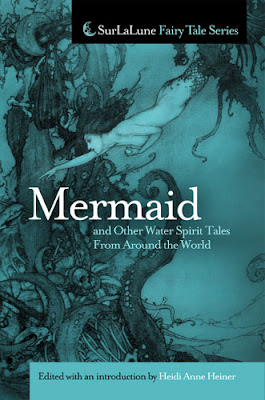 "Agnete and the Merman" by Jens Baggesen is a creepy and tragic tale. It tells of a merman who comes from the sea, professing his deep love for the human Agnete (a gender reversal of the Melusine/Undine/Little Mermaid stories). She loves him too and agrees to go down into the sea with him; they live for two years happily and she bears him two sons.

But Agnete hears church bells coming from land and desires to go back; she promises her husband to return by morning. She follows the midnight church bells and sees her mother. Her mother pleads with her to come back to land; she has abandoned not only her parents by joining the merman, but her two human daughters. Agnete claims she must go back to her new family, but then she is told that her father, after searching for her in vain, killed himself; the church bells she had heard were for his funeral. She then turns around and sees her mother's name on a grave-time passes differently under the sea (as it often does in Faerie) and the conversation with her mother was either with her ghost or vision from the past.

The poem "Agnes" by Adam Gottlob Oehlenschlager is essentially the same story with some minor differences, Agnes stays underwater 8 years and bears 7 children instead of two; she does not encounter her parents' funerals or tombstones but seems to die randomly after returning to the surface.

There were different versions of this old Danish ballad floating around, even Andersen himself had written a version of Agnete and Merman earlier in his life.

Another mermaid story, "The Mermaid's Prophecy," illustrates a mermaid that was captured by the King and Queen to tell their fortune. Unfortunately for the Royal couple, the Queen's death is predicted.

It seems that a vast majority of folk mermaid tales are tragic. In romances, they center on lovers from two different worlds, and whether the maiden was originally human or from the sea (as in selkie stories), whether she actually loves her husband from a new land or not, she tends to inevitably feel the pull back to her original home.

Other non-romance tales focus on the supernatural abilities of mermaids. Not all of these are tragic-there is a humorous tale from Denmark called "Hans, the Mermaid's Son." The offspring of a mermaid with a human has super strength and ventures onto land to find work. He is disliked for his odd ways and how effortly he shows up the workers around him; his boss keeps trying to kill him off. Yet the mermaid's son is ignorant of all these attempts to hurt or kill him; he is so strong he is practically immune to their tricks. The story is similar to many fairy tales of the simple, yet kind-hearted fool who ends up victorious-in the end he makes sure everyone around him has plenty of riches, and being tired of living among mortals, goes back to the sea.

When you compare these and other mermaid tales to "Little Mermaid" and the other literary tales of the time, you notice that the mermaids of lore who are so otherwordly and powerful have been reduced to foolishly lovesick teenagers. Yet while many see this as mysoginist, Andersen himself identified with the Little Mermaid, as have many others, male and female (such as Zemlinsky the composer), who experienced non-requited love. While most people today are shocked at the tragic ending, that part is actually the most consistent with traditional mermaid tales.