It happened one time that a poor man had a dream three nights in a row of a sack of fairy gold buried under a bush on his property. He didn't know if there was anything to the dream, but decided it would be well worth it to check. 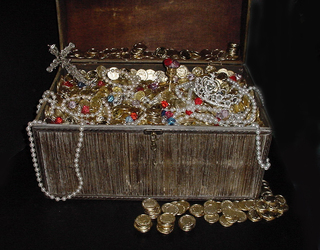 He told no one of his intentions, but at the end of the day started digging in the place he had seen in his dream. Before too long he struck a sack full of gold and jewels. He carried the sack home, staggering under its weight. He hid the sack in the cow barn, for if anyone came to visit, he did not went his new wealth to be public knowledge.

He went in and told his wife about the treasure, who was entertaining strangers by the fire. She encouraged him to bring it in so she could see, but the man waited until the strangers were gone, so as not to tempt thieves.

His wife warned him he had made a mistake. Her father had much knowledge of enchanted fairy gold, and the treasure is likely to melt away unless a man were to spit on it. Her husband doubted whether the treasure should melt, after staggering home under its weight.

When the strangers left, the man and his wife went to the cow barn, to see the cows straining to get away from the sack. The wife noticed the sack was moving, and thought it was no longer treasure; the husband claimed a rat must have gotten in.

But when the sack was opened, a great eel came out, twisting its head around; the two people were too afraid to move. The eel broke out through the roof and was never seen again in those parts, but that was all the man had left of his fairy gold.
*******************

This tale may be one of the sources of the whole legend of leprechauns with their pot of gold at the end of the rainbow (tales of faerie gold are all over, although I don't know where the rainbow part came from?). Leprechauns, an Irish form of Faerie, were more often red in older tales, such as the "wee little man" in the Irish story "The Snow, The Crow and the Blood" I shared earlier this month. The site yourirish.com has some information about current leprechaun beliefs and how to catch a leprechaun if you find one, but warns that they are such tricksters, you may be better off avoiding them entirely...or from this RavensShire post on How to Survive an Encounter with Fairies:

"Some people stumble upon fairies, without the fairies or the person having really planned the encounter. This is when people capture leprechauns or other fairies to try to force them to give up their treasure. How well this works and whether the fairies seek revenge afterwords depends on the individual. One person who robbed the fairies was never able to leave his house afterwords. Others were able to live happily with their ill gotten gains. These stories don't say exactly what the difference is, but it is established that it's very, very difficult to steal a fairies treasure and attempting to do so can get you into a lot of trouble." 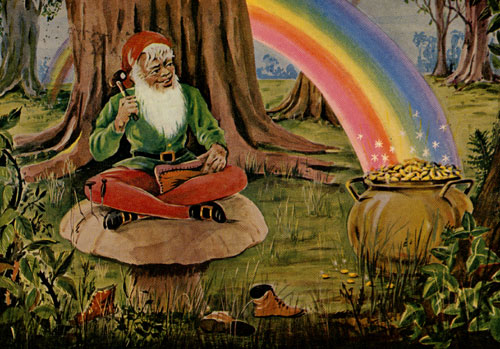 Gypsy at Once Upon a Blog also shared a lovely Irish tale in honor of St. Patricks Day-check it out here! And Heidi Anne Heiner has an Irish Cinderella tale at Surlalune!
Posted by Kristin at 9:07 AM