Fairest of them all

Sometimes fairy tales are seen to be shallow and superficial because of the focus on physical appearance. Nearly every major tale (except for Beauty and the Beast, thank you very much) features love at first sight.


Sometimes this bothers me too, but remember we interpret these tales through the lens of our own culture. Back when arranged marriages were the norm for ladies, they would often be married off to older, ugly, potentially abusive husbands. It was a natural thing for them to dream of choosing who they would marry-someone young like them, handsome, and compatible. It's not a perfect fantasy, but a better alternative to their situations. 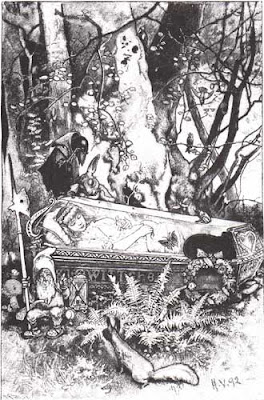 Hermann Vogel, illustration of Snow White
But more than that, a fairy tale is really a different genre. A fairy tale character never voices their thoughts or motivations-the reader knows by what they do. For example, Cinderella doesn't grieve, she cries. The crying is the outward manifestation of her inner feelings. In the same way, beauty is an outward indicator that a person is good on the inside. Who knows to what extent this may have been believed by our ancestors, but we'd be lying if any of us claimed we don't also judge by appearances, at least a little. 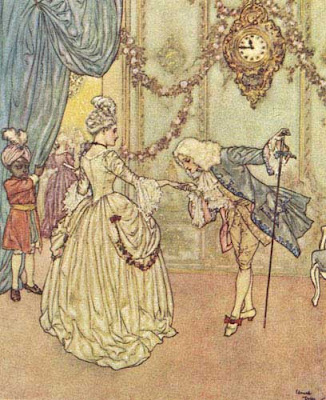 And sometimes I wonder about the affects of our new visual media, as opposed to oral/written tales. Certainly beauty is emphasized in the old tales-The Grimms' The Frog Prince begins by describing the younges princess who "was so beautiful that the sun himself, who has seen everything, was bemused every time he shone over her because of her beauty." Yet there is nothing specific in this description. Generally the only agreed upon beauty trait in fairy tales is blonde hair, which was not only considered attractive but could be representative of royalty because of its relation to gold. So a girl reading a fairy tale about the most beautiful princess in the world very easily can slip herself into that image. In a way it can increase her self-esteem. But in visual media, there is one specific actress or model who represents the beautiful heroine. It's much easier to compare yourself and feel that you don't measure up when Hollywood standards of beauty are so narrow, as opposed to tales where the scenes and people are left mostly to your imagination.