The Grimms' "The Goose Girl" enjoys mid-level fairy tale fame. She isn't a household name like Cinderella or Rapunzel, but fairy tale fans love the story. Shannon Hale's novel version helped spread its popularity. Perhaps one reason it isn't as well known is the overall similarities to Cinderella, although I think I might like the story of the Goose Girl better.

The story begins as a young, beautiful princess is sent off to be married to a prince of a far away country. She is given a speaking horse named Falada by a fairy, andher mother gave her many gifts, including a maid, and a handkerchief with three drops of blood on it (or in some versions, a lock of hair). Her mother warns her not to lose the handkerchief, because it will be of help to her.
While on the journey, the princess gets thirsty and asks the maid to fetch her some water. The maid refuses and the princess says nothing. She asks the maid again, who once again refuses and tells the princess to get her own water. The princess does, and as she does she loses her mother's handkerchief. The maid now takes full advantage of the situation. She makes the princess switch clothes with her, and took her beautiful horse. Once at the palace, the maid was accepted as princess, and the princess was sent to work tending geese.

The maid knew that Falada could betray her, so she gave orders to have her horse beheaded. The princess, hearing this, gave a piece of gold to the knacker if he would nail Falada's head to the gateway into town. The princess walked under this gateway each day. As she did, she would say, "Alas, Falada, hanging there!"

Falada's head would answer, "Alas, young Queen, how ill you fare!
If this your tender mother knew,
Her heart would surely break in two." 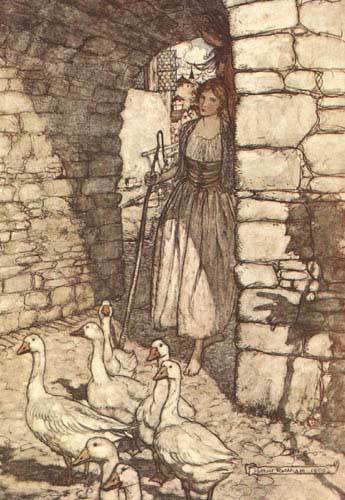 Then she would go out into the meadow with the boy who tended the geese, Curdken. She would sit down and let out her beautiful golden hair. Curdken, when he saw it, wanted to pull it, so the princess said a little spell for the wind to blow Curdken's hat away until she had finished braiding her hair.


This same thing happened the next day as well. Curdken complained to the king of the goose girl's conversations with the horse head, and her golden hair. The king hid himself the next day to see what really happened, and saw everything as Curdken described it. 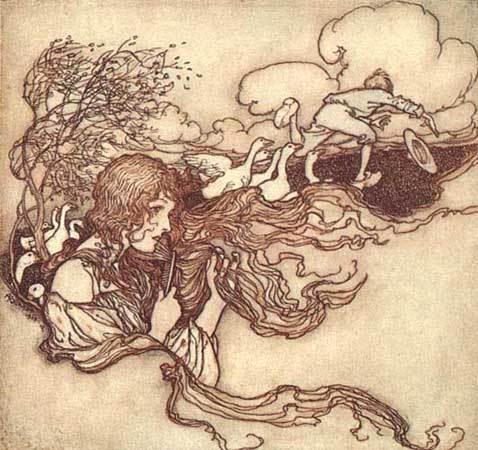 Above illustrations by Arthur Rackham

The King later questioned the goose girl, asking what all this meant. She told him that she had promised not to reveal the truth to anyone, but he advised her to tell her troubles to the iron stove, which would not technically break her promise, while he went away and listened. He revealed to his son, the prince, that this was the true bride, and the prince rejoiced.

A feast was prepared in honor of the princess, whom the false bride did not notice. The king asked what punishment should be given to such a person who did certain events which he described, summarizing her own crimes. The false princess declared that such a person deserved nothing better than to be stripped naked, put in a barrel studded with pointed nails, and driven through town by two white horses until she is dead. She then receives her own punishment, and afterwards the true princess was married.