Today is a very special day-the birthday of my brother, one of my best friends. Half Cherokee Indian, he was adopted into our family 17 years ago. So in honor of him, I'd like to share some Cherokee folk lore.

First, the legend of Spearfinger, from here.
"Spearfinger, once upon a time, could appear in any shape she wished. She was a master of disguise. However, beneath her disguises, she was a stone monster whom no one could harm. She was most dangerous in the autumn, for then she could walk out of the mountains hidden in smoke from bonfires. One day, late in October, out of that smoke she appeared to a group of children, disguised as an old woman. The children saw only an old woman, and they offered her a seat. Then she smiled at a little girl. "Sit on my lap, and I will brush your hair," she said. The innocent girl sat upon her lap and then, with her special stone finger, Spearfinger stabbed the child's side. The girl never felt a thing. Later the girl walked home, and that night she grew very sick. Then the villagers knew. Spearfinger had struck again.Month after month, year after year, she struck at the children.
Eventually, the people called a grand council. "We must stop her," they agreed, and the medicine men spoke. "Here is how to catch Spearfinger. We will dig a pit, cover it, and lure her into our trap. Afterwards, we will find a way to get rid of her forever." Then they made a huge bonfire, and when Spearfinger saw the smoke, she came down into the village and chased the young men right to the trap. Just as the medicine men had planned, she did not see the pit, and so she fell in."Now what do we do?" the people wailed. That's when the chickadee came. It flew to the witch's hand, and there it sang. So the people fired at that hand, and true enough, that was where Spearfinger's heart was.The people watched as Spearfinger sank to the ground, dead at last. Today the Cherokee still honor the chickadee, calling it "tsi kilili," or truth-teller." 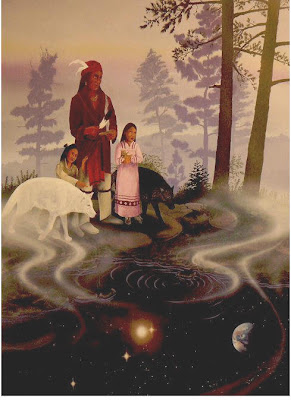 This picture is entitled Standing at the Pool of Creation. The site it comes from includes a description of the Cherokee creation tale:

"Old Grandfather saw how the land above the sky had become crowded and he knew he would need to create a place for his Cherokee children to live. The world at first was covered with water and there was no good place for the Cherokee. The raven went first to find a place but to no avail, finally the water beetle said he would find a place and everyone laughed. The water beetle dove down and brought up the mud that would become the Smokey Mountains. I believe good and evil must have taken animal forms and came to earth with the Cherokee."