Lest we think fairy tale parodies are only a recent phenomenon, I stumbled across a delightful book from 1905 at an antique bookseller's stall this summer; Oliver Herford's The Fairy Godmother-in-Law. The book contains several humorous poems, beginning with the title story. 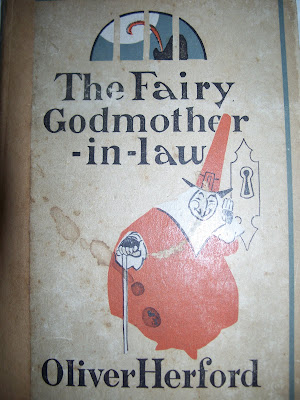 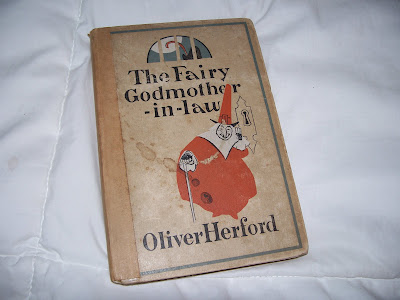 The preface:
"It is not always well to place
Unbounded Faith in Fairy Lore,
Believing that in every case
They all lived Happy evermore.

Stranger than Fiction though we deem
The Truth, it does not follow, too,
That Fairy Tales, because they seem
Still Stranger, must be still more True.

Far be it from me to assail
The Truthfulness of Fairy Writ,
But let us take a Well-Known Tale
And see what really came of it."


The story is very short- only 25 small pages of verse, with illustrations. It describes the Prince as "most industrious- at Play; a Leader too-in Fashion's Set; and Deep-that is to say, in Debt." Cinderella's fairy godmother comes to pay a visit to the castle, where she plays magical tricks on everyone, making herself quite a nuisance (at one point she even gives the Prince wings instead of arms, much to his dismay, but they change back at midnight.)


Attempting to do a favor for the Royal couple, the godmother replaces their outfits for an upcoming ball with more beautiful, enchanted ones-yet since they do not realize their garments are magical, they don't know to escape before midnight, and are revealed in their woolen undergarments to all their guests, thus starting a craze for wool materials. 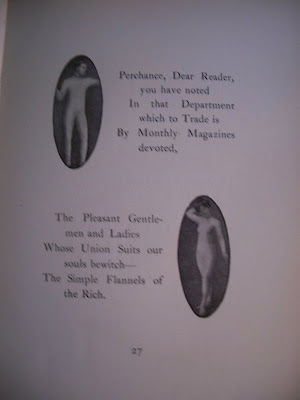 The story ends:
"Poor God-mamma, 'twas her last caper;
One night to throw some Light about
She changed herself into a Taper,
And Cinderella blew her out.
The Princess then divorced the Prince,
And Both lived Happy Ever Since."
Posted by Kristin at 12:02 PM