Petrus and Catherine Gonsalvus: Historical Beauty and the Beast?

I've heard of people trying to find true historical precedents for fairy tale characters such as Bluebeard and Snow White, but despite all my readings on Beauty and the Beast, I had never heard of a supposedly historical Beast, until recently an anonymous commenter led me to this video on the smithsonianchannel. It tells of the story of Petrus Gonsalvus, a man with hypertrichosis, or Ambras syndrome-a body completely covered in hair.

You can read the basics of his life on Wikipedia. The video on smithsonian is about 46 minutes long, and details the life of Gonsalves, as well as some of the modern people who have the same rare condition, and some of the science behind it. The description claims: "It's a condition known as "hypertrichosis" or "Ambras Syndrome," but in the 1500s it would transform one man into a national sensation and iconic fairy-tale character. His name: Petrus Gonsalvus, more commonly known today as the hairy hero of Beauty and the Beast. Discover the facts behind the fable as we follow Petrus's remarkable life with a very rare and hairy genetic condition. Then learn about this medical phenomenon, which continues to fascinate and perplex scientists to this day."

It's quite a sad tale of how humans treat those who are different, especially in the 16th century. But the claim that Petrus Gonsalvus is not just coincidentally similar to the Beast, but the inspiration for the classic fairy tale, had me suspicious. No history of BATB I've ever read has cited this man as being part of the tale's history. Was this just another sensationalized show, exaggerating to get more views? The story is always linked back to the myth of "Cupid and Psyche". There is a long string of folklore between that and the Animal Bridegroom tales written in the French Salon period. I'm not sure if you can prove either way if those tales most similar to BATB were around before Gonsalvus, it's so hard to date the oral tales, but I think given how widespread Animal Bridegroom tales are all over the world, folklorists would say they were being told before Gonsalvus. The documentary hardly mentions the fairy tale at all until this at the end-"And even if there had been tales of Beauty and her love for the Beast before them, their lives must have influenced one of the most famous love stories in world literature."

It's an interesting theory. Given that the couple was well known at European courts, it's not impossible to assume that they would have been known to Basile, who included several Animal Bridegroom tales in his collection in the late 1600s, or later Villeneuve and her French contemporaries (D'Aulnoy's "The Ram" and Bignon's "Princess Zieneb and the Leopard" are very similar tales that predated Villeneuve's). 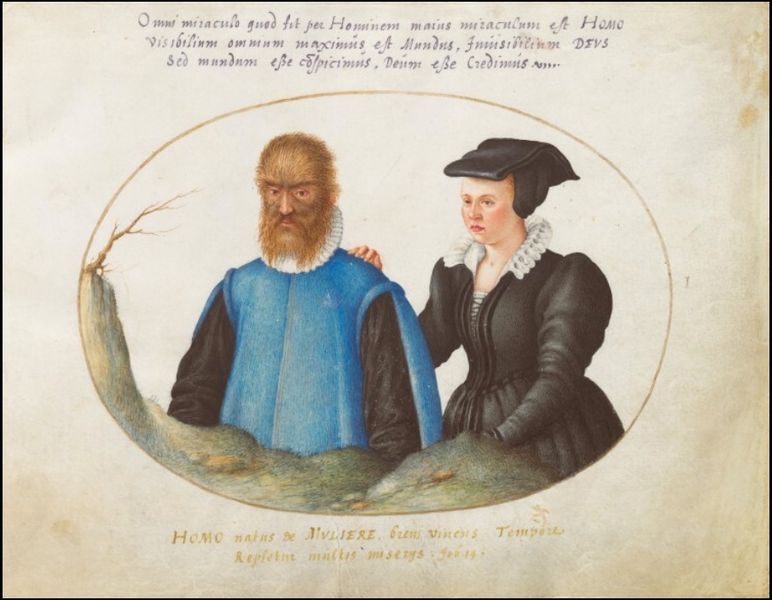 Petrus Gonsalvus was given a wife-a wife selected for her beauty, not told what her husband looked like, and ordered to marry by the Queen. Yet, the couple got along, and may have grown to fall in love-in the illustration above, the resting of Catherine's hand on her husband's shoulder is a sign of affection. They had seven children together-some of them with hypertrichosis (the only ones the public cared about). The family attempted to live a normal life, but were exploited by a public that did not see those with differences as entirely human-tragically, the children who inherited their father's condition were all given away as gifts to other European royalty. 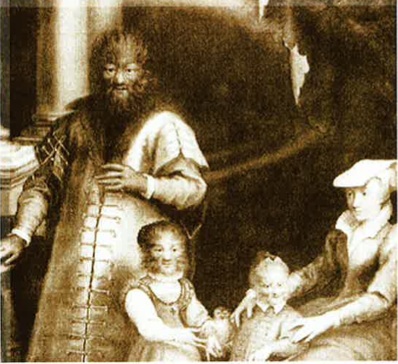 Who else thinks that the story of Catherine Gonsalvus is just begging to be made into a novel by Kate Forsyth?
Posted by Kristin at 8:54 AM