Princess Zeineb and King Leopard: Before Beauty and the Beast

So we know that Beaument's Beauty and the Beast was basically a summary of Madame de Villeneuve's story of the same title from 1740. And though Villeneuve did give the story many of the unique twists that shifted it from the oral stories to the tale we know today, she didn't create it in a vacuum either. Jean-Paul Bignon's collection of tales, from 1712-1714, included Princess Zeineb and King Leopard, an Animal Bridegroom tale. In the words of Jack Zipes, the story "is extremely important because of the role it plays in the Beauty and the Beast tradition. It is more than likely that Madame de Villeneuve knew this version, and it may have served as the basis for her tale that later influenced Madame Leprince de Beaumont." And...I just realized that I've been spelling "Beaumont" incorrectly this entire blog. If I get really bored one day I'll go back and fix that.

ANYWAY...the story is of a King who stumbles innocently upon a palace and randomly threatened with death if he doesn't bring one of his daughters. He has no intention of letting them go, but the eldest insists. She goes, loses courage, and returns. The next four in the line go as one bunch and all lose courage. This helps to save time and fit into the fairy tale pattern of threes. Note: in this version the sisters are good and try to save their father. Usually the sisters are too selfish to consider the sacrifice, but here their only vice is lack of courage.


The youngest daughter, Princess Zeineb, is determined not to lose courage, so she goes and is waited upon by servants. She never actually meets or talks to the leopard, but every night he comes and lies in her bed-without touching her. This is more like Cupid and Psyche. Finally the Princess starts wondering if it's really a leopard. One night she finds the skin and rips it up, for which she is chastised by the Prince, who was nearly about to break the spell, but now her curiosity has ruined it. She doesn't cower before him, but gives him excuses, including that "girls are naturally curious." Note: this was written by a man (and at least Psyche had been specifically warned NOT to listen to her mother, Zeineb got nothing. Communication is key here, guys). Villeneuve replaced this violation with staying too long at home.


There are apparantly no pictures of this fairy tale online, but this sort of relates: 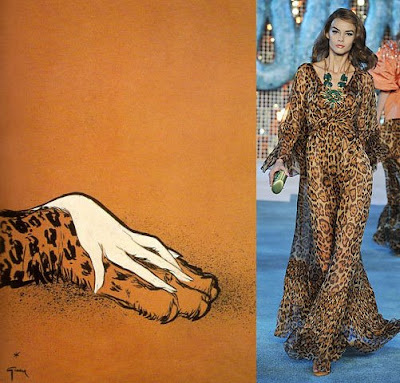 Image from here...even though I didn't see it on the site and can't credit it...
Princess Zieneb embarks on a long, difficult journey where she uses her embroidery skills (yes, a domestic skill...) to make a living for herself. However, some village pervs tried to take advantage of her, and later get revenge and have her burned alive when she spurned them. She survives her trials though her resourcefulness (including bribing the judges at her trial) and through a spell King Leopard had taught her. In the end, she's saved from Joan of Arc fame in the nick of time when the King comes back to town, and you'll never guess who he really is! Yup, he's King Leopard, who pardons and marries her. It ends with this odd little line: "Then I gave the judges who had let themselves be bribed by my money the punishment they deserved. On the other hand, those judges who had been moved by my beauty were punished in a more lenient way." Isn't the whole point of the story...not to judge by looks? But I guess these pre-Villeneuve/Beaumont stories are more about the dangers of curiosity.
Posted by Kristin at 8:45 PM