In Madame D'Aulnoy's time (c.1650-1705), it was fashionable for the French to sit in their salons and share fairy tales they had made up. Creating a good fairy tale was an admired skill, and D'Aulnoy was among the best. She hated the way women were treated at the time, and "all her tales are filled with violence and violation of some kind that must be resolved." By making her fairies disagree with one another and making life harder for the humans, she was also making political statements about Louis XIV and his ministers.

Her tale "The Ram," though literary and not oral, is an Animal Bridegroom tale that may have been known to Madame de Villeneuve when she wrote "Beauty and the Beast."


It starts out with a bit of a King Lear theme-a King has three lovely daughters, but the youngest, Marveilleuse, is the most beautiful and his favorite. He returns from war one day and his daughters are overjoyed to see him. He asks each of them why they chose to wear the colors they did, and the oldest daughters have very suck-upy reasons ("your sight to me is like that of Heaven and all the Heavenly Host")-my dad would be very concerned if I told him that but this King loved it. But he was very upset that Marveilleuse just wore white because it suited her, and she thought that would please him. However, he gets over it, only to get infuriated again when she dreamed not that he brought her beautiful gifts like her sisters, but that at her second sister's wedding, he offered her a golden vase in which to wash, like a servant. (This part is similar to the sisters' requests of gifts in BatB.) 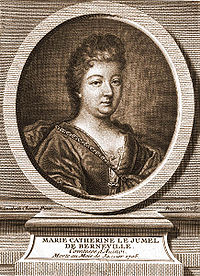 Now we get all Snow White, because he is so insulted at Marveilleuse he orders the captain of the guards to take her out into the forest and murder her and bring him back her heart and tongue. Immediately her servant girl and pets offer to give their hearts and tongues instead, where they all committed suicide but the monkey's organs were too small and the servants' (who was a Moor) were too black. So the Princess, all alone, stumbles upon a group of civilized, talking rams living in luxury. The King Ram tells her how he was enchanted by an evil, ugly fairy for not returning her love (just like Villeneuve's Beast). Among the fairy's victims the Princess finds the ghosts of her faithful servant and animals.

The Princess finds herself falling for the Ram. This Animal Bridegroom story is unusual in that she knows that he will transform eventually, and just from paying his sentence to the fairy, not from her declaration of love. Well, they live happily until her eldest sister gets married. She goes to the wedding-anonymous in her supposed death, and in all her new splendor (kind of like Cinderella? How many fairy tale allusions can we fit into this one tale?) everyone is enchanted by her but doesn't know who she is. She slips out, and the King orders that if she ever comes again, the castle doors should be shut and she detained (this tale definitely features Oedipal issues, but mainly the father's).
The second sister gets married and Marveilluese wants to go to the wedding. The Ram can't live long without her, and she promises to return quickly. But her father had locked all the gates to keep her in. He invites her to the banquet, and offers her a gold basin to wash in, just like in her dream. The story comes out, but since this takes a long time, the lovesick Ram comes to the Palace to find her. No one at the palace wanted her to go back, so they refused to let the Ram in. When the Princess finally did leave the Palace, she found her Ram dead by the door.
Hey, this is my hundredth post!
Posted by Kristin at 10:31 AM