In the past couple years, I've mentioned to people that a dream job of mine would be to work as a Disneyland Belle. To my surprise, several adults reacted more like "Well hey, you should go for it," instead of "Haha, that would be fun, wouldn't it," and change the subject like I expected them to.
When I say "dream job" I mean "wild dream," and I don't think I would actually enjoy it for long even if I were to survive the casting process, which I doubt.
First of all, Disney character cast members would probably not start out right away being a Princess, they would be one of the characters with a big, hot costume, like Pluto or something. Even then they rotate between the Princesses, I wouldn't get to be Belle every day. Although I've also heard that each Princess needs to be a certain height, although I think that's for the Princesses who sing in the shows, and not the characters who stand around all day. But Belle is supposed to be 5'5", which is perhaps a sign, because I'm 5'5"... I've heard lots of things from people who were friends with people who were Princess cast members and etc., so don't bet your life on all this being true, but I've also heard that a Princess can't go into work if she has a zit one day. I'm pretty sure there's a weight limit as well as height restriction and I'd guess that the Princess actors are supposed to be around a size 2 or 4. So once I get perfect skin and lose weight, maybe I can consider a career change. And it's a fact that Disney casts their characters on how beautiful they are, especially for the Princess characters.
Then, the Princess actors are coached in how to pose as each Princess, as well as how to draw their signature. Each Princess has only a limited amount of phrases she can use. Starts to sound more like work than fun to me. Plus, the auditions are very competitive. People from all over the country-and world-want to work at Disneyland, and what girl wouldn't want to be a Princess for a living? If this were to be my job, I know I'd soon lose the magic of Disneyland. It would become tedious to stand and pose with strangers all day long.
More information can be found on Disney entertainment careers here. Of course, all the people on the website are like, "You should definitely try out, it's such a great experience!" but, they've already made it. The official website won't have any horror stories. I've looked into the music internships as well as singing and acting, but seems like there's nothing for a flute player trained classically. And though I would love to be in the Beauty and the Beast show, and there's some truth to taking risks and pursuing your dreams, but also the practical side--is it really worth it to fly down to Disneyland for an audition I have a one in a million chance of making? I dunno, maybe I need to watch more Disney movies about wishing upon a star so all my dreams come true, but I have other dreams too that I AM fulfilling now, that are a little less selfish anyway. 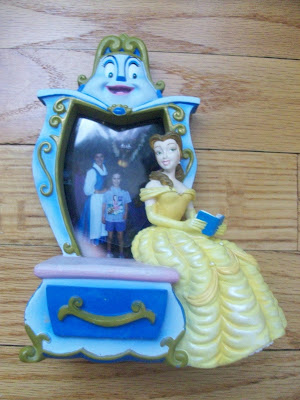 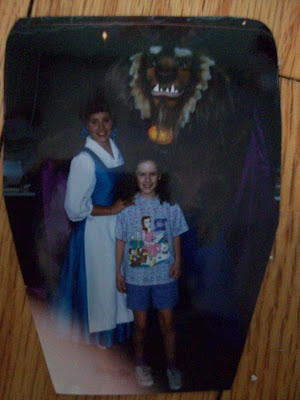 But, check this picture out. (And the great frame.) That's me circa 7 or 8 years old. Look how happy I was! Notice the Belle on my t-shirt! I look for Belle and the Beast every time I go to Disney and haven't found the Beast (just Belle telling stories to little girls).
Posted by Kristin at 3:02 PM

Labels: Beauty and the Beast, Disneyland