Taken from Beyond the Looking Glass, edited by Jonathan Cott. "Wooden Tony" was written by Lucy Lane Clifford and tells the story of an autistic child, which is especially relevant to my work, as several of my students have autism. The story is very sad and moving. I find it strangely beautiful, and yet it's more like a horror story than a traditional fairy tale. As always, you can read my summary, but the original story is infinitely better. 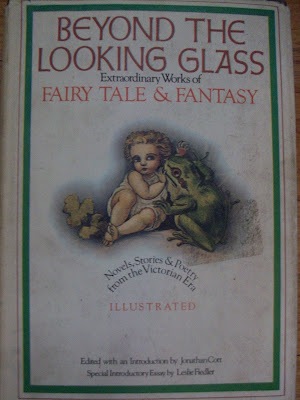 Tony was a lazy boy who would sit by the fire. He never did chores, and his eyes often had a blank expression, and the neighbors would call him "Wooden Tony." He noticed that, when people were far away, they were smaller, and he told his mother he wished he could be far off so that he would be small again and people would stop demanding things of him and scolding him when he didn't do them.

But Tony loved to sing. When he would go out to pick eidelweiss, he would come back with no flowers but with a new song no one had heard before. Tony also liked to watch his father carve little figurines out of wood during the winter; these he would sell in town for money.

One morning a dealer came to buy Tony's father's figures. He had heard Tony's song and wanted to share it with the world. He took Tony with him to Geneva. He told Tony to sing, and he did, and as Tony sang, the dealer wrote down the notes of his song. As they walked past mountains and trees, Tony sang and sang, and the dealer copied. Yet as he went, "his song was different, it seemed no longer to come from his heart but only from his lips, and as he sang he heard the notes repeated. The song was going out of him and on to the dealer's wire. He did not look towards it, he did not care; he felt nothing keenly. His legs were growing stiff and his feet were hard...He was not tired, or warm, or cold, or glad, or sorry, but only in a dream."

Tony and the dealer arrived at the town, but the town felt strange to Tony, who was used to nature. He could no longer sing anything. The dealer put Tony in a little wooden house and told him to go upstairs. He did, and saw a wooden figurine his father had carved before, that he had been afraid of, but no longer was. Tony waited in the dark with the woman figurine. Sometimes he would hear the notes of his song, twanged back on wire, and he and the woman would catch a glimpse of light.

One day, Tony's mother and father were in town. His mother saw a cuckoo clock and Tony as the wooden figurine. His father insisted that could not be Tony, but his mother knew him. "His song has gone into the world, but Tony is there," she insisted. His father wondered if, since Tony's head had been wooden, the rest of him had turned wooden too.

His mother wanted him back, but when the song was finished, Tony was jerked back into the darkness. 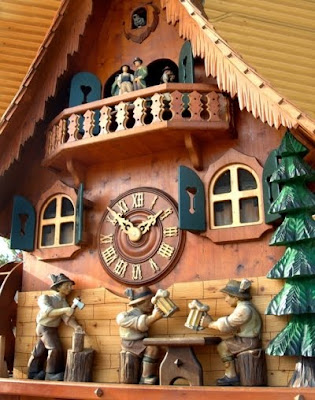 "Life is not only in nodding heads, and work is not only for hands that move and feet that walk; it is in many other things."
Posted by Kristin at 11:14 AM