While reading Donna Jo Napoli's Beast, which I will have a full post on shortly, I came across a reference comparing Beauty and the Beast to the Greek myth of Persephone. 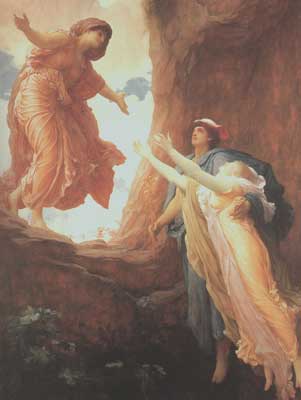 Leighton painting
Persephone was the goddess of the Underworld-but not by choice. While out picking flowers one day, she was abducted by Hades. Her father Zeus demanded her return, but before he returned her, Hades tricked Persephone into eating six pomegranate seeds. Food from the Underworld is powerful and will keep the eater there (much like fairy food). So Persephone spends six months of the year in the Underworld, as payment for the six seeds she ate.

The flowers Persephone was picking reminds us of Beauty's innocent request for a rose, which ultimately brought her to the Beast. Donna Jo Napoli's Beast makes the observation that Belle probably thought she was going to live with someone who was more or less the lord of the Underworld. And Beauty does go back and forth between her strange lover and her family- though not as much as Persephone.

Tile art by William Morris
Yet the Persephone myth is also similar to the tale of Little Red Riding Hood, who also got into trouble for straying off the path to pick flowers. She and Persephone are punished for this, while Beauty is usually commended for her appreciation of nature over materialistic goods. Yet, as critics have pointed out (Maria Tatar is freshest in my mind,) Little Red wasn't really a story about the importance of obeying parents or staying on the path until the Grimms got ahold of it. In fact, in older versions, Red would often perform a striptease for the wolf instead of the "My, what big (insert body part here) you have!" Not the Little Red we fell asleep listening to...