Catherine Breillat's Bluebeard is available to watch on Netflix Instant Play, for anyone who has Netflix. Even if you don't, I'd still recommend watching it.

Obviously, any movie based on Bluebeard is going to be dark-if not, it's terribly done. The movie is a retelling of the Perrault story-the plot and characters are fleshed out but nothing altered from the tale. Juxtaposed between the scenes from the story are two sisters reading the fairy tale and interacting with it, which brings another dimension to the story. One of the main themes I picked up on in this retelling was sister relationships, especially concerning older vs. younger sisters. Bluebeard's wife is the youngest sister, and the little girl reading the tale is the youngest sister, teasing her older sister, who is scared of it. I think it's true, as the movie seems to portray with both pairs of sisters, that often youngest siblings are more determined to prove that they are not afraid of things people might assume they'll be afraid of, which is possibly what led Bluebeard's wife to marry him-out of spite and a desire for independence.
The sister pairs are more obviously meant to be connected when you see their names: and this could be wrong because as you see it's rather confusing, but I believe Bluebeard's wife is Marie-Catherine, her sister is Anne. The little girls are named Marie-Anne and Catherine. It's even more interesting because Perrault didn't name the heroine, just Sister Anne, so the filmmaker gave the heroine her own name.
Bluebeard is an intriguing character. The movie portrays him as more sympathetic, so you see why Marie-Catherine is drawn to him. He's still kind of creepy, but maybe if I didn't know the tale's ending I might think of him as more of an outcast Beast figure. It's all the creepier because they spend over a month of marriage where he appears very kind and sincere towards her. But at the end, when he tells her she must die, she's hardly even emotional. She claims she agrees and doesn't even cry or plead, just stalls for time. I wonder if this is to reflect the tone of the tale itself, which treats the more fantastic elements of the plot more matter-of-factly. Sister Anne is never shown calling for help, and we don't see Bluebeard killed. The movie ends with a long shot of her caressing the head of Bluebeard on a platter and looking off into the distance.
The infamous scene where she discovers the secret chamber with the corpses blends the two story lines together. Instead of Bluebeard's wife, you see the little girl who's reading the story to her sister run down the stairs, open the door, and walk among the corpses (saying to herself, "I'm not afraid, I'm not afraid, I'm not afraid-"). It was a very intriguing switch. After that it goes back to the original cast for the fairy tale storyline.
The ending of the little girls' plot line surprised me-that's all I'll say. 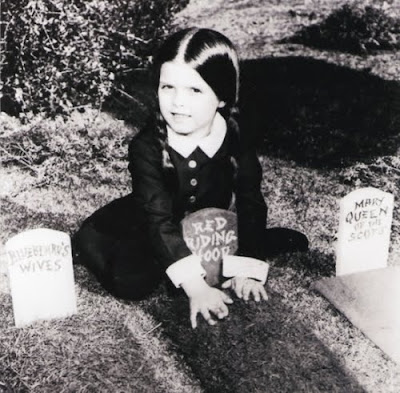 This picture has nothing to do with the movie, other than the grave on the left. From stylerookie.
Also! Apparently, because the wife was so young when she married Bluebeard, he and her mother agreed that they would sleep separately until she was older. Was this done back then? I just assumed girls always got married off as soon as they could start making babies, mainly so that they could...start making babies. Why even get married if you're not sleeping together? Most modern retellings of Bluebeard are all about the morbidity and sexuality. We're fascinated by this tale because it's so forbidden (sort of like a young child being told, "you can't read about sex/serial killers-you're too young" like the younger sisters in the movie.) But I kind of respect that the movie downplayed the more provocative elements (young girls having sex, murder), which is sure to generate interest but not necessarily the best kind, and concentrate on other elements of the story, like relationships.
Posted by Kristin at 11:50 AM