Vintage Beauty and the Beast book 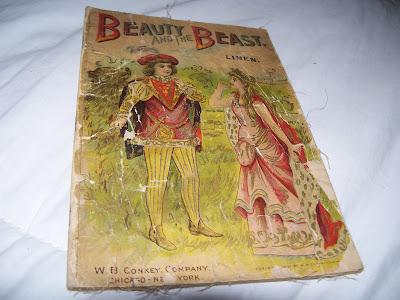 I scored this amazing vintage children's version of Beauty and the Beast from 1897 off ebay. I wish I'd saved the images before I bought it, because now I can't get them, and my camera's pretty bad and can't capture close-up details. Anyway, it's made of linen, which is genius-we should still make children's books out of linen and not paper, it's more durable. The text and illustrations are not attributed to anyone. The text is a summary of the Beaumont version, with a couple interesting twists.
In getting Beauty to the castle, they just have her dream about her father's encounter with the Beast and she wishes herself there. It's not a bad way to make the story faster-by the time the father has his experience, describes it to his children, and Beauty has her own experience entering the castle, you get kind of tired of hearing basically the same thing three times.
The other change is, the Beast does not become a Beast by being cruel and selfish, nor from being cursed by an evil fairy. He became a Beast because he wished he could be a pet bear one day. Isn't that the most stupid reason ever? It makes the Beast seem so childlike and unattractive. I'd rather have a cruel Prince who has to learn how to love, or the innocent victim Prince. The cover illustration also has both Beauty and the Prince looking very child-like, which adds to the overall impression.
I've seen one of the illustrations available for different products on etsy. Below is a link to personalized book plates made from one of the illustrations from this book.
Book plates-etsy 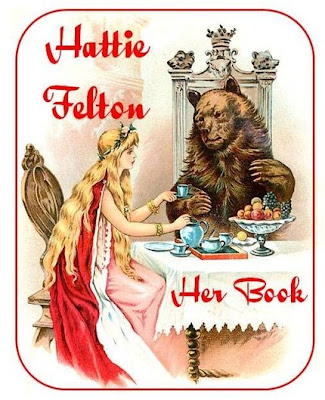