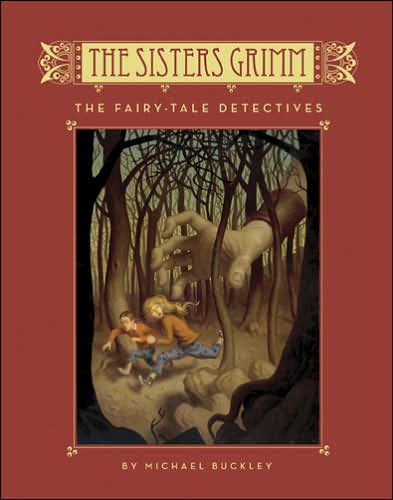 I heard about the Sisters Grimm series over on Surlalune and was excited to check it out. The series revolves around two sisters, the last remaining descendants of the Brothers Grimm. In the first book of the series, "The Fairy Tale Detectives," by Michael Buckley, they discover that the fairy tales their ancestors wrote down were all true, and that the fairy tale characters are still living. The sisters get involved in adventures, solving fairy tale-related crimes, as the first book's title would indicate.

I found it to be an entertaining read, though not destined to be a classic like Narnia or Harry Potter or anything. When I heard that the fairy tales were all historically true, I was hoping that the characters would read the Grimm fairy tales and use their knowledge of the stories to help them solve the crimes, perhaps exploring lesser-known tales along with the Grimm versions of famous tales. The closest thing they got to this was imitating the Headless Horseman in order to scare away Ichabod Crane at one point. And, yes, the story mentions that all fairy tales are true, not just the ones the brothers Grimm collected. In fact, hardly any of the characters in the book are actually from a Grimm tale. I was beginning to think Michael Buckley had done no research into fairy tales whatsoever until I read that Dorothy's magic shoes were silver. Well, that's something. Other than the above incidents, the stories of the fairy tales were hardly alluded to-just that the characters all live together in one town (something like Into the Woods, only not as sophisticated.) Some other prominent characters include Puck of Midsummer Night's Dream, Cinderella's Prince Charming, the three little pigs, and Jack the Giant Killer.

I wasn't too crazy about the plot until the end, where it became more exciting and unpredictable. I do like that Michael Buckley dealt with darker materials-the beginning is very much like the Series of Unfortunate Events, with two orphans dependant upon themselves because they can't trust the adults around them. I also like that some of the traditional "good" and "bad" fairy tale characters get flipped in the book. (But I did not like his portrayal of Beauty and the Beast. You can mess with any fairy tale characters, but don't mess with Beauty and the Beast!)

The writing was fine, but I thought the dialogue lacking. A line from the Magic Mirror that struck me as particularly juvenile: "You may not have heard, but the whole circus-clown-meets-crazy-street-vagrant-look is so over." I may continue to read more books in the series to see what they're like. Not that the book was bad at all...I think I was just disappointed because I saw so much potential in the premise. But I'm very critical of fiction, so many people may enjoy the books more.