So I found this book at my library, and I'm always trying to find new recipes since I'm still a bit of an amateur cook, and obviously relating cooking to fairy tales appeals to me. It's "Fairy Tale Feasts," by Jane Yolen (fairy tales,) Heidi E.Y. Stemple (recipes), and Philippe Beha (illustrations). And it's a really great book for a child who knows nothing about cooking, or for an adult who might already know something about fairy tales and/or cooking. The book is filled with tales that are each connected with a recipe, which is a great idea because it gives kids (and...adults like me) motivation to cook, while at the same time helping the story to come alive and become more personal. I liked that, along the edges of the pages, there were fun facts and trivia about each of the tales and recipe ingredients.


The tales are a good balance of well-known tales, and lesser known tales from various cultures. (Of course, that's a Western version of well-balanced...that's probably a whole future post.) Many fairy tale lovers have pointed out the relationship between fairy tales and food, but food is a main feature of many tales, well-known and lesser known, or the absence of food leading to hunger, so the theme for this cookbook is quite appropriate.
And the recipes that I tried were all good. Below is a picture of my apple cinnamon oatmeal-another example of how the book is great for any level cook-it includes the recipe for basic oatmeal, which might be good for little kids who have never made oatmeal, but also includes several variations for a more adventurous cook. (I'm really excited to try the holiday oatmeal suggested, involving eggnog, once the holiday season starts). And the porridge recipe is actually NOT from Goldilocks and the Three Bears, but a story about a magical pot that cooks sweet porridge, but won't stop unless it is told specific words. And of course, one day the heroine's mother tells the pot to start, and before the daughter comes back, the whole town is filled with porridge... 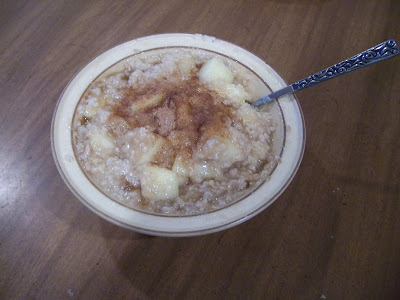 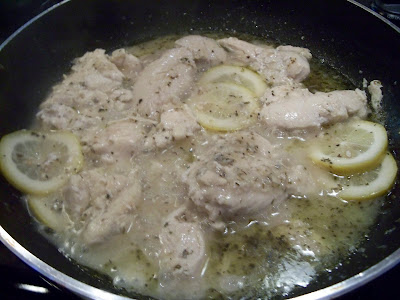 I've also provided a picture of my lemon chicken for your viewing pleasure. And I'm always on the lookout for gluten-free recipes, since one of my good friends is on a gluten-free diet, so I was able to make her some carrot soup (associated with the story of Brer Rabbit and the Tar Baby) and Snow White's Baked Apples. I did not get pictures of them because I made it for company and would have felt weird taking pictures of my cooking in front of them.
Posted by Kristin at 4:01 PM