Disney's Beauty and the Beast dvd 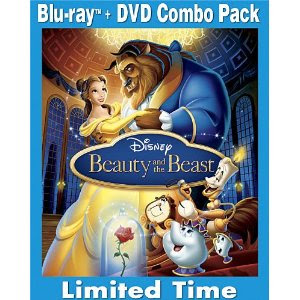 Finally-Disney's Beauty and the Beast is coming out of the vault on October 5th. Now you can purchase the "Diamond Edition" and see it in High Def. Although, if you wanted to view the Platinum Edition, discontinued in 2003, there were plenty of special features:

Disc 1:
High-Definition Transfer Using Digital Technology
3 Versions Of The Film
-Special Edition
-Original Theatrical Edition
-Work In Progress Edition
Audio Commentary
Sing-Along Track
Maurice's Invention Workshop Game
Disc 2:
The Story Behind The Story
Character Profile Game
Disney's Enchanted Environments
The Broadway Musical
Disney's Animation Magic
Chip's Musical Challenge Game
"Beauty And The Beast" Music Video By Jump 5
"Break The Spell" Adventure Game
The Story--Bringing The Story To The Screen, Early Presentation Reel
The Music--Alternate Score: The Transformation, Alternate Version: "Be Our Guest," Deleted Song: "Human Again," Beauty And The Beast Music Video, Original Demo Recordings With Introduction By Alan Menken
The Art--Designing Beauty And The Beast, Art & Design Gallery
The Characters--Character Galleries, Animating Beauty And The Beast
Pencil Version: The Transformation
Animation Tests
Setting The Stage
Layouts & Background Gallery
Tricks Of The Trade
Camera Move Test
Release & Reaction, Poster & Ad Design, Trailers & TV Spots, Large Format Trailer
You can also get a VHS for super cheap on amazon.
But the Diamond Edition comes in 2 or 3 disk versions. You can preorder both on Amazon, but the 2-disk edition doesn't come out till November 23. The 3 disk set includes:
3-Disc BD Bonus Features: • Restored film• Three versions of the film• Original theatrical release• Special extended edition• Original storyboard version (BD-exclusive)• Original theatrical version with a PIP of the storyboard • Disney song along mode • Audio commentary• Beyond Beauty: The Untold Stories Behind Making Beauty And The Beast (interactive) • Broadway Beginnings – Up close and personal celebrity interviews with Nick Jonas, Donny Osmond, Toni Braxton, and others who have starred in the Broadway production • Composing a Classic: A Musical Conversation With Alan Menken, Don Hahn, and Richard Kraft• Deleted sceneso Alternate opening (boards)o Belle in the library – never-before-seen moment where Belle meets three new characters in the library• Art galleries – Only available inside the “Beyond Beauty Experience”• Family play gameso Enchanted Challenge: help Belle and the Beast fall in love in order to break the spell before the last petal falls (Disney Quest)o Bon Jour, Who Is This? A Disney TelePlay Game – Powered by BD-Live. Using your cell phone, guess the identity of the other players before they guess yours • Music & moreo All-new music video featuring Disney Channel star TBD • Classic DVD bonus features
I don't really know if the Disney vault policy is a good one. I'm sure that for all the people who are like "Oh, Dumbo's released, we have to get it for posterity before it goes back in the vault!" there are at least the same number of customers who are like, "Oh, I bet my nephew would like Peter Pan for his birthday. What? It's not available? Bummer" and then they forget about it. Plus in general it just makes me feel manipulated and angry. Thank goodness for amazon.com, right?
Posted by Kristin at 3:34 PM