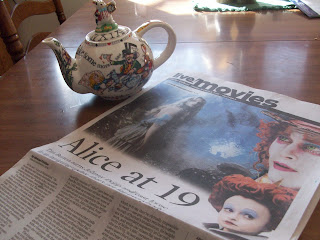 The Chicago Tribune had a pretty good review of Tim Burton's Alice in Wonderland. I'm kind of a purist when it comes to books I like being made into movies, so though I love Tim Burton, I'm almost afraid to see the movie. The fact that it's a sequel to the original story could be an opportunity for some really interesting creative ideas, but also could be a reason to separate from the heart of the original story even more than a typical remake would. Apparantly there's a big battle between the Red and White Queens. As much as I love a big epic fantasy with action and excitement, that's not the point of Wonderland. Wonderland is a place of nonsense and absurdity, more like a dream than our world. Good and evil, or enough consistency in plot to carry through an entire battle, seem out of place in Wonderland (which is apparantly called "Underland," an interesting choic, makes it seem more sinister. Not that I mind sinister). In fact, the fact that Alice can go there as an adult seems like that shouldn't be; as if, like Neverland, Wonderland should be reserved for children.

But these are my own personal reservations, I can't really say until I've seen the movie. I'm too cheap to see movies in theaters much so it will probably be a while before it's available on Netflix, but I'd love to hear other people's opinions as they see the film.

Oh and this gives me an excuse to show off my teapot. 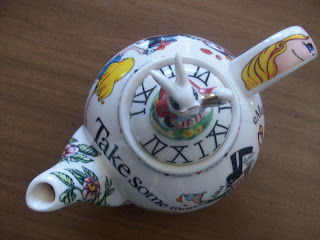 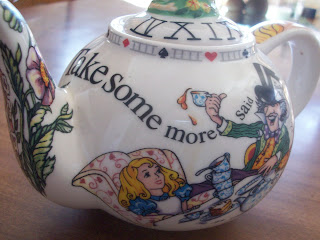 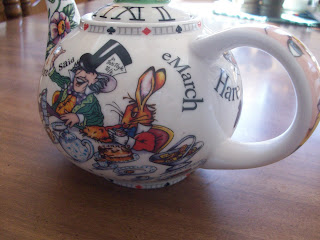